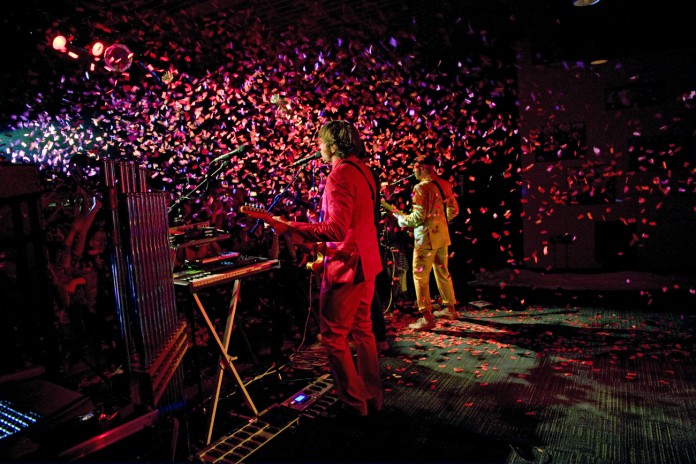 After getting the green light to perform at UCSB, the band OK Go gave a show on Friday, November 19 that was as visually appealing and upbeat as the music videos that made them famous.

The band’s performance debuted their latest album, titled Of the Colours of the Blue Sky, and reverberated off the walls of The Hub with an aural mixture of alternative and pop rock, rich harmonies, and strong beats. The performance at UCSB was one stop on the band’s tour for their new album, which came out January 12 and is a significant departure from the pop rock sounds of their preceding album, Oh No.

Unlike Neon Trees’ performance the previous week, OK Go didn’t kick off their show with an opening act. Clad in red, blue, yellow and green suits, they stepped onto the stage to the sound of thundering bass beats and went full speed ahead with the song “Do What You Want” from Oh No.

The title of the song was a foreshadowing of the night because OK Go didn’t just put on a sing-and-dance spectacular—they played a song using hand bells, donned jackets that spelled out OK GO in lights on the backs of them, and lead singer Damien Kulash even brought his acoustic guitar out to the middle of the audience halfway through the set to play amongst adoring fans who flocked around him.

“It definitely had the aesthetics of their videos,” Alex Aga-Leddy, a UCSB first-year undeclared major said about the show, “At first I thought they were famous for their videos, but now I can see that they are also good performers.”

Despite the musical differences between Of The Colours Of The Blue Sky and the band’s first album, the show incorporated a few songs from Oh No into the program, including “Do What You Want,” “Don’t Ask Me,” “Invincible, and “Here It Goes Again,” the song that propelled OK Go to stardom and earned them a Grammy in 2007 for its accompanying music video.

But the performance primarily showcased the hits off of Of The Colours Of The Blue Sky and the diversity of OK Go’s sound. The songs showed off the band’s ability to play catchy get-up-and-dance tunes reminiscent of Oh No (“White Knuckles”) as well as power anthems (“This Too Shall Pass”) and minimalist, more exposed songs (“Last Leaf”).

“They knew their stuff and the solo guitar riffs were a hail back to the ‘70s,” Lisa Bevier, a first-year UCSB Economics major, said. “They definitely went all out.”

For those who wondered if OK Go’s live performances would be as visually appetizing as their music videos were, they were in not for a taste but an entire buffet of sense-evoking elements.

Although no treadmills were used during the concert, OK Go still impressed with their incorporation of a huge confetti cannon and flashy, almost schizophrenic lights and lasers—and that was before they told everyone to put on their 3D glasses for the showing of the new music video for  “White Knuckles.”

“We want the old school, real shit 3-D with red and blue glasses,” Damien Kulash, the lead vocalist and guitarist for the band, said. “You’re not gonna get any more dimensional than this.”

Lizzy Szabo, the Associated Students Program Board Concert Coordinator, said that the event was an overall success.

“The turnout was good,” she said. “We just try to get the best acts we can. It’s us negotiating with the agents, and every detail of the show is handled by the students.”

As for the actual performance, she was even more impressed.

“We’ve never done confetti in The Hub before, so besides the cleanup it made things pretty fun,” she said. “I never thought I could bring a band like that [OK Go] here. They definitely are famous for their creativity and were the most unique band we had this quarter.”