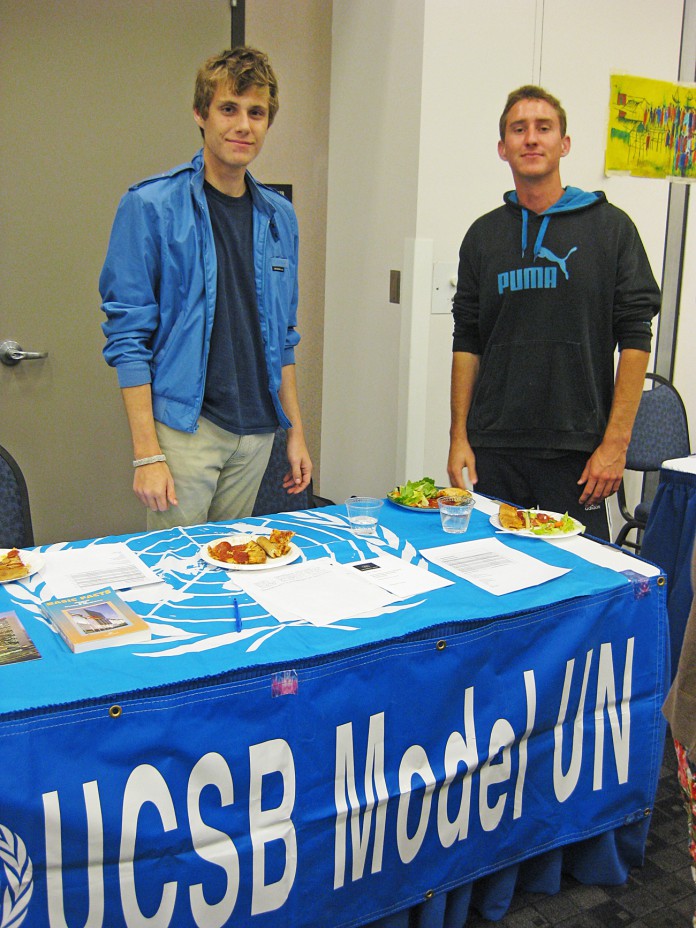 Close to 250 people flooded Corwin Pavilion on Monday, November 15 to learn about and support Kiva, the micro-financing organization that offers small loans to entrepreneurs in developing countries.
The Kiva Banquet was one of the primary kick-off events of UCSB’s Human Rights Week, which hosted lectures, documentaries, and activities all throughout last week to raise awareness about the issues surrounding human rights.

Jen Houston, the primary organizer of the Human Rights Group event, said the turnout far exceeded anyone’s expectations.
Attendees were asked to donate a minimum of five dollars at the door, and in return received a five-dollar token that they could donate to the Kiva entrepreneur of their choice. Information boxes that featured people applying for the loans were scattered throughout the room, and attendees could read everyone’s background and intent for the loan before choosing where their money went.
By the night’s end, the banquet raised $1,100 for Kiva. One-hundred percent of the profits will go to the micro-lending organization, since Human Rights Group received funding from UCSB’s Associated Students to host the banquet.
“We hit a record with the money raised,” said Houston.


Houston explained the adversity of putting on such an event in the midst of UC budget cuts.
“Last year the Kiva banquet received $5,000 from A.S. This year, we were granted only a third of that,” she said.
In addition to a video clip from Kiva founder Matt Flannery directly addressing UCSB students, the banquet featured music by Tyler Markowitz and the MTs as well as two speakers, Rebecca Tinsley and Jane Roberts.
Rebecca Tinsley, a former BBC reporter, has worked in politics and human rights since age 14. She began her work as a human rights activist in Sudan around ten years ago. At the banquet, she discussed the many ongoing atrocities and human rights violations still happening in the war-torn North African country. She is also the founder of Waging Peace, a group based in London fighting for human rights.
Jane Roberts is the co-founder of 34 Million Friends of the United Nations Population Fund, which is a network of 34 million Americans who donated one dollar to help the women of the world. She was also a nominee for the Nobel Peace Prize.
Five non-profits—Direct Relief, Women’s Economic Ventures, The Eleos Foundation, Africa Schools for Kenya, and Chad Relief—had tables at the banquet for students to learn more about each organization.

Miguel Alberran, a member of Amnesty International and Human Rights Board, said the Kiva Banquet was the perfect kick-off to Human Rights Week. Alberran’s organization helped put on an event on Tuesday, November 16, which focused on Indigenous communities and their fight to overcome oppression.
“I felt that a successful event on the first day of Human Rights Week like the Kiva Banquet could be used to catapult the rest of the week,” he said.

Global Studies professor Richard Applebaum is the faculty advisor for Human Rights Group, but he would take no credit for facilitating the Kiva event.

“The students put it all on themselves. I only helped a bit with publicity,” he said.
“What motivates me most about teaching at my age is seeing students who care about the world getting involved.”