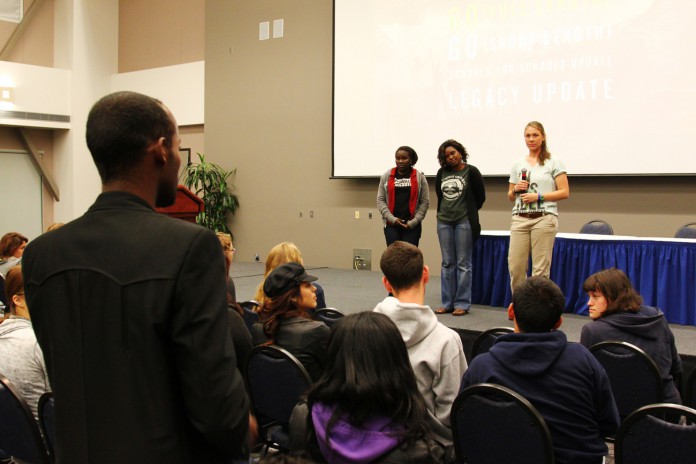 When living in Uganda at age 12 with both parents dead, friends and family abducted to become soldiers, no public education and no hope for change, Rwaga Fiona could have easily become a struggling mother of five. Instead, Fiona, now 22 years old, is studying public administration and human resources. Invisible Children provided her with education that will allow her to make changes in Uganda.

“I was once invisible, but someone came to my rescue,” Fiona said.

Invisible Children held a screening at Corwin Pavillion on November 10 with Fiona and her mentor, Oroma Christy.

Fiona and Christy left Uganda and are now on tour with the crew to speak to audiences around the world about how Invisible Children changed Fiona and other Ugandan youth for the better.

“It’s harder to ignore things that are in front of you. Telling us herself how the program was helping her brought more legitimacy to what [Invisible Children] was doing,” UCSB third year Cultural Anthropology major Miguel Albarran said.

Fiona and Christy were brought together through the Legacy Scholarship Program, a program which gives students a post-primary education, better learning environments and mentors. The mentors become more than just teachers to these children. Fiona said that even if she called Christy in the middle of the night, Christy would be there for Fiona.

By sponsoring a mentor for 35 dollars a month, Northern Ugandans like Fiona are provided with opportunities to change their country.

“Because Uganda is being robbed of their would-be-doctors and would-be-professionals, the country can’t rebuild itself when the war is over. That’s why Invisible Children is focusing on education,” UCSB fourth year Political Science and Global Studies major Quinn Nguyen said.

“Invisible Children inspires and fosters these kids because if they didn’t, there wouldn’t be a future for them.”

A rebel army in Northern Uganda, the Lord’s Resistance Army (LRA), was created to overthrow the Government of Uganda, and for 23 years this war has caused Northern Uganda children to live in fear. If the children are caught by the LRA, they must become a soldier and will end up abducting more children to fight for the LRA. The Ugandan government made camps to provide a safe place for these kids, however, many years later they still reside in these small camps.

Today, the war is still not over.

“It’s not a normal war, where it’s country versus country. [The LRA] are basically terrorists. It’s difficult to win a war against terrorists because they don’t lose anything,” Nguyen said.

The LRA and Joseph Kony, the leader of the LRA, are no longer in North Uganda but they are still terrorizing the local communities close to there and they are interfering with the democratic Congress of Congo.

“Having children in this is so difficult because this isn’t conventional warfare. If we wanted to get to Kony, we can’t shoot the children,” Nguyen said. “We can’t fight the army because the children are the army.”

Nguyen does not think the war will be over soon.

Kony has avoided signing a peace contract multiple times. No one can control what Kony does, but Ugandans can be prepared with the education they are provided with through Invisible Children.

“Invisible Children is focusing on the child and not the politics of the war,” said Nguyen.

The country was at war for years until three college kids took a trip to Africa in 2003 to document and publicize this neglected war and children soldiers. They created Invisible Children and are trying to make the world aware of this tragedy. Their documentary Rough Cut made the world recognize that there is a problem in Northern Uganda.

“Access to public education is something hardly anyone would disagree with. Unlike many other organizations, [Invisible Children] is able to bring people together, in terms of their goal,” said Albarran. “They have done a pretty good job allowing people to see the results the organization [has made].”

According the Invisible Children website, through the money raised they provided 8,400 Ugandan children with sanitation, water, books, teachers and electricity.