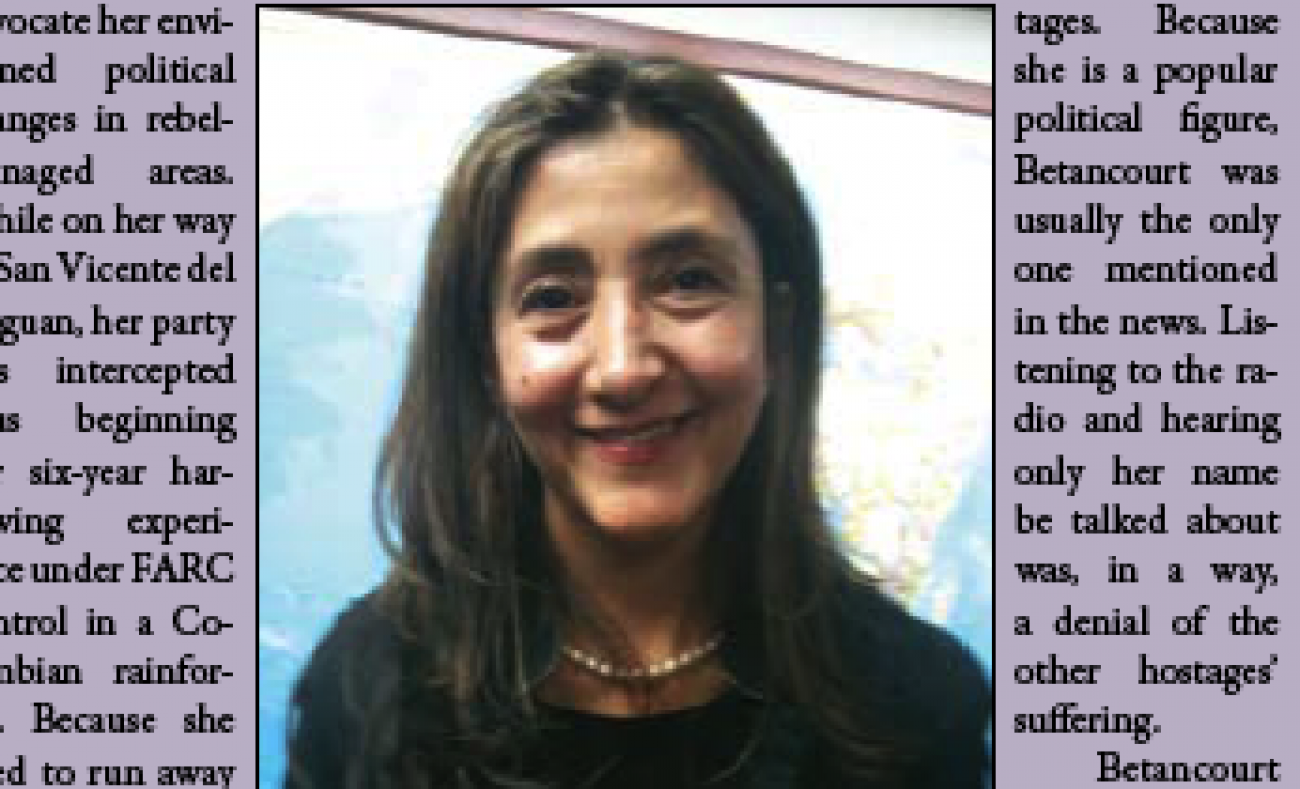 Former Colombian senator and presidential candidate Ingrid Betancourt came to UCSB’s Campbell Hall on October 27 to discuss her new book, Even Silence Has an End. The book revolves around her six-year captivity in the Colombian jungle. Betancourt was kidnapped by the Revolutionary Armed Forces of Columbia (FARC) in 2002 and rescued by the Columbian army in 2008 and her book reveals her experience in captivity.

In 2001, Betancourt began her campaign trail for presidency. She was eager to meet with people from different socio-economic standings and decided to advocate her envisioned political changes in rebel-managed areas. While on her way to San Vicente del Caguan, her party was intercepted thus beginning her six-year harrowing experience under FARC control in a Colombian rainforest. Because she tried to run away seven times, four of those six years were spent with a chain locked around her neck.

None of her attempts were successful. A captive with her though, was able to. Ironically, the triumphant captive was known to be afraid of his own shadow and didn’t know how to swim. Betancourt remembered him as a mixture of awe and stupor every time he heard that she tried to escape. He timidly asked her one day how she could continuously try to make a run for it, to which she replied, “Just acknowledge that you have the fear, then put that aside. You take one step after another toward your escape.”

Right after escaping from the FARC, Betancourt’s once fearful friend hurriedly went to the authorities where he helped pinpoint the whereabouts of the rebel captors. For as Betancourt said, “So many things [just] had to line up in order for our rescue to happen.”

Betancourt started her presentation on why she chose to write a book after her liberation. Seeing her children after all those years made it hard for her to talk about what happened because she knew she would inflict pain on them.

Betancourt felt that writing down her unsaid words was like going back to the jungle and reliving everything.

“When you’re alone and you’re writing, you don’t have the eyes of the others, and you’re not distracted by their response”, she said. “I just began writing and saw things that even I didn’t initially plan on recalling. “

Global Studies Professor Richard Appelbaum asked Betancourt how she coped with the scrutinizing looks and judging remarks from her fellow hostages. Because she is a popular political figure, Betancourt was usually the only one mentioned in the news. Listening to the radio and hearing only her name be talked about was, in a way, a denial of the other hostages’ suffering.

Betancourt answered by saying that all of the hostages were then experiencing the loss of their identities. They all had to fight for what little space there was to share and had to live in fear because of the wielded guns that their captors held.

She continued on to convey that it was during her captivity that she saw the many faces of cruelty.

“We have the ability to hurt the people we love, and must be careful not to unleash the monster,” said Betancourt. “We should always try to bring out the good in others.”

Betancourt concluded her interview by expressing her feelings of escaping.

“It was strange – the first sensations of freedom. I felt like a free bird from a cage, scared to jump into the void because of the uncertainty of who will be there once I go out and of how I will adjust to this new life thrust upon me. More than anything, there were the feelings of gratitude. It was a miracle.”