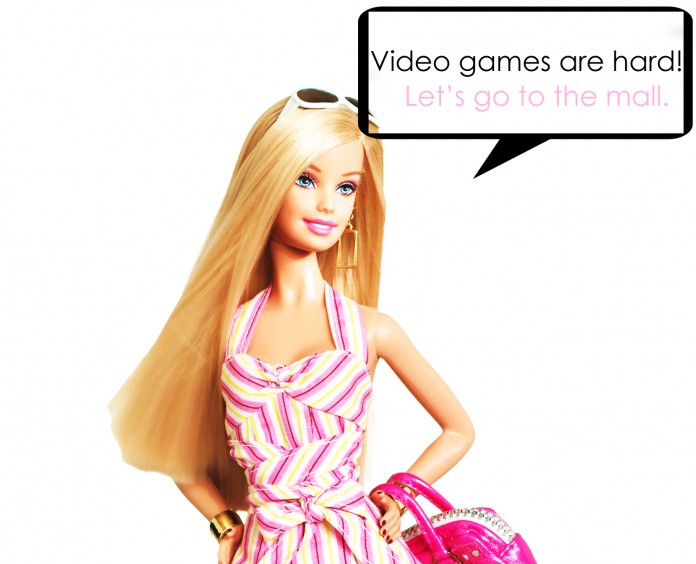 Let me begin by getting the ‘F’ word out of the closet. Hi, my name is Victoria, I’m a Feminist. And I’m also a proud console gamer. I remember like it was yesterday; for my tenth birthday all I asked for was the newly released PlayStation.

Imagine my pure happiness as I opened my present and received that beautiful gray piece of machinery. My first games were Spyro the Dragon, Grand Turismo 1, and Tekken 3. How amazingly classic a game selection! The world of fast cars, combo beating action, and dragon fantasy worlds were at my fingertips. I was elated.

I was always surrounded by console games as a child. I was constantly hanging out at my father’s friend’s house rocking Pong on the Atari. Fast forward some years and now I’m playing Mario Brothers on my oldest brother’s NES (Nintendo Entertainment System). I’ve played Sonic the Hedgehog on the Sega Genesis and as well as the first person shooter (FPS) classic Goldeneye on the Nintendo 64. These are all special moments from my childhood that I can remember in a blink of an eye, and I wouldn’t trade those memories for anything, not even for a million dollars.

But as a girl growing up, I was mocked by the cootie-infested boys in my elementary school classes about my love for video games. “Girls don’t play video games! You’re not a girl!” I remember locking myself in a bathroom stall for a quick cry before coming back into the classroom and socking the boys in the face. I also when I went to the principal’s office for the first time.

I went over to the aforementioned cootie-infested boys’ house to play their video games. They had Goldeneye. I lost to one boy and he stated, “See girls can’t play video games!” I retaliated and won the second round only for me to state, “You’re not very good.”

There is an assumption that when you as a girl plays a video game that you are playing for your entire gender. Not for yourself. If I happen to do poorly one round, all girls can’t play. For a male gamer his failure is attributed only to himself, not the entire male gender.

Today, I can frag any one of my guy or girl friends in Halo or any FPS. I proudly pay for my Xbox gamer tag. I own a Hello Kitty Xbox 360 with a matching pink controller. My favorite games currently are Bayonetta and Halo Reach. I’m not a fan of Call of Duty, not because I’m not “hardcore enough,” but rather, I don’t appreciate the realism; it makes me feel uneasy, it feels like I’m going into Afghanistan and killing real people via avatar. Gamer, anyone?

Yet, even as a 21 year old gamer, my gender still comes into question when I play any game online. When I am connected to Xbox Live waiting for the game to load up and I talk, male gamers assume one of the following:

1. I’m a prepubescent boy whose “nuts” haven’t fallen.
2. My boyfriend must be in the bathroom and I’m stepping in for him.
3. I must be taking a break from the kitchen, entertaining my husband with my lack of ability to play video games.

Even as I frag the hell out of them, most seem to think it was just because I’m lucky, ‘cause everyone knows, girls don’t play games.

There is an assumption floating around the webisphere that Feminist gamers are whiners. We can’t handle the gaming world and we should just stop before we make games worse. I’m a Feminist who wants to see more diverse female centric characters such as those in Portal, one’s that aren’t products of the male gaze or if they are, are aware of it, like Bayonetta.

I want to see more females developing interactive media. I want to experience an Xbox Live gaming situation where I am not bombarded with sexually derogatory remarks about my gender. Yes, I want a more inclusive place for female gamers.

This is not to say that I want violence-free games. I want games that are just as competitive and as violent as the ones that are out there currently. I want games that challenge me, make me get upset, and make me want to throw my controller only to hit “try again” for the fifth time. I do not want to be bombarded with “teabagging” every time some male gamer kills me during social slayer or rumble pit.

I’m tired of seeing so many male dominated games with one dimensional “damsel in distress” type characters. Or if they are female leads, I want characters more diverse than Lara Croft.

So, to my fellow Xbox Live community, Why are you so afraid of women gamers? As soon as we enter into the gaming world and experience sexual harassment is it because some male gamers are afraid that we might beat them? I assume that sexual harassment targeted to female gamers is a form of shit-talking to try to psych us out before game play, but to me, it only fuels my fingers to press the right buttons, use the laws of physics in that game to kick more ass then necessary.

To begin to create a more inclusive environment for female gamers on the Xbox Live network, male gamers I ask you to stop treating female gamers with such disrespect. It’s time to embrace the gender diversity of all gamers. And teabagging outside of elite kills is just unnecessary.

Female gamers are on the rise in numbers, according to Entertainment Software Association; we now account for 38 percent of the console gaming population. We are here, proud, and ready to kick ass. Just stop with the kitchen and pregnant jokes. C’mon now, it’s all about grenade, aim and shoot, not mayo, meat and cheese.