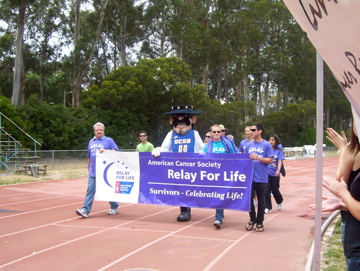 Regina Sarnicola
Students, faculty, community members, and cancer survivors teamed up to share stories of triumph and loss, play games, and spread cancer awareness at the annual Relay for Life, hosted by the American Cancer Society on May 14 and 15.

Around 1,300 participants in 145 teams at UCSB collaborated to raise money for the event, which totaled $96,000. The event was a two-day, 24-hour camp-out and walk that took place at the UCSB track and included games, catered food, speakers, live bands, and a chance for people to come together and bond over a common, yet tragic cause.

“[My favorite part was] to see hundreds of college students all gathered to be a part of something positive and bigger than themselves,” said Terra Gale, the Relay for Life Manager who acted as liaison between ACS and the Relay committee.

The walk kicked off at noon on Friday with an opening ceremony to welcome the teams, along with speakers talking about their personal connections to cancer.

“People don’t realize there are a lot of others around them who have been touched by cancer, because no one wants to talk about it,” said Karin Yung, Team Captain Coordinator and Online Chair. “This was an opportunity for people to support others, learn, and let people tell their stories,” Yung added.

Funded by Associated Students and the Community Affairs Board, preparation for this year’s Relay began as far back as Fall. The early preparation, along with a committee made up of 15-20 separated subcommittees, allowed for a smoothly run and eventful fundraiser.

Throughout the day, teams hosted games, such as duck duck goose, a water balloon toss, and root beer pong. Also present was entertainment and music from various singers and bands, including two UCSB a cappella groups, Vocal Motion, and Naked Voices. During the late night and early morning hours, a dance party was held with a live DJ and disco lights to set the scene and keep the fun going.

Teams divided the 24-hour walking time between members, as at least one person from each group was required to be walking on the track in time increments specified by the team. The walk was symbolic of cancer never sleeping, so for 24 hours, neither would the participants. At midnight, walkers switched direction and began walking in the opposite direction to represent the day when a turning point in cancer would be achieved, when lives would be saved instead of taken.

For individuals who had raised $100 or more, free food was available that was catered and donated from various local businesses, including Woodstocks, Starbucks, Chino’s, Chili’s, Rockstar, UCEN Dining Services, and Fresco’s Café.

El Dorado, one of the largest relay teams, consisted of over 60 people and raised around $3,000. Khoa Mai, one of the three team captains, said he wanted to get involved after he saw the “Relay for Life” signs, while also feeling inspired by friends who had created a team. Mai was one of many participants with a personal connection to the event, after losing his aunt, uncle and mother to cancer.

“It is a cause I really believe in so that is why I got involved,” he said. “It was a really fun, successful experience.”

Survivors were welcome and active in the walk as well, helping to kick-off the start of Relay with a “survivor walk” that proved that not only the elderly or unhealthy were affected by cancer, but also people as young as college students.

Cancer survivor and college junior, Alexandra Troup, was one of the cancer survivors at Relay for Life, after undergoing chemotherapy and surgery for neuroblastoma when only a baby.

“It was great they got survivors involved because it shows that people care enough to put real work into helping and reaching out to those who have battled cancer, not just to help others avoid it,” Troup said.

Teams were encouraged to pick a theme and a type of cancer for which to spread information and awareness. Along with neuroblastoma, ovarian cancer and breast cancer, among others, were some of the cancers chosen.

One team, which had chosen to represent breast cancer, was the Pink Link Breast Cancer Research and Awareness Club, which was started two years ago by UCSB students Breanna Duplisea and Erin Miller. Their campsite hosted massages, had materials for “Beading for Boobies” to make friendship bracelets, and included a large board urging people to write about their understanding of the importance of breasts.

Duplisea said that she had started a similar club in high school after talking to a woman with stage 4 cancer who had wished she had known more about cancer preventatives.

“Our purpose is to link the community and student body to what is going on in the world of cancer and provide knowledge about preventions,” Duplisea said.

Their theme, entitled “Relax,” was chosen to enlighten others that high levels of stress may increase chances of acquiring cancer.

“Relay is one of my favorite times of the year,” she said. “It was a lot of work, but it was fun.”

Another team at Relay was the sorority, Alpha Phi, led by team captain Gina Fronke, who decided not to pick a specific cancer to represent.

“The American Cancer Society represents all cancers, so I thought it was a great place to show my support and raise money to find a cure,” Fronke said. “A lot of the girls in the house have been touched by cancer in some way and it was a great way for all of us to come together.”

During the night, campers joined around the main stage to hear from more speakers and watch a slide show of pictures of loved ones who had been victims of cancer. The highlight of the night was the Luminaria ceremony, where bags purchased and decorated in honor of those who had died of cancer were lit and placed all around the track. A silent lap was then walked for cancer victims.

“The Luminaria ceremony always gets me,” Yung said. “It is very touching yet inspiring.”

Relay for Life ended with a closing ceremony with awards being presented to teams, which recognized the best theme, best campsite, and most spirited team.

Overall, the event received positive feedback and comments. Although the event took place on a Friday night, several members admitted that they felt that being present at the walk was more worthwhile than heading down to Del Playa to party.

“I think people did opt out of partying to attend Relay this weekend,” Mai said. “And we still had fun.”

According to Yung, money is continuing to come in and the final total will not be known for a few months. Last year, the record breaker was $100,000, yet Yung remains hopeful that this year’s goal of $110,000 will be achieved.

“Relay has definitely been the highlight of my years here,” Yung concluded.