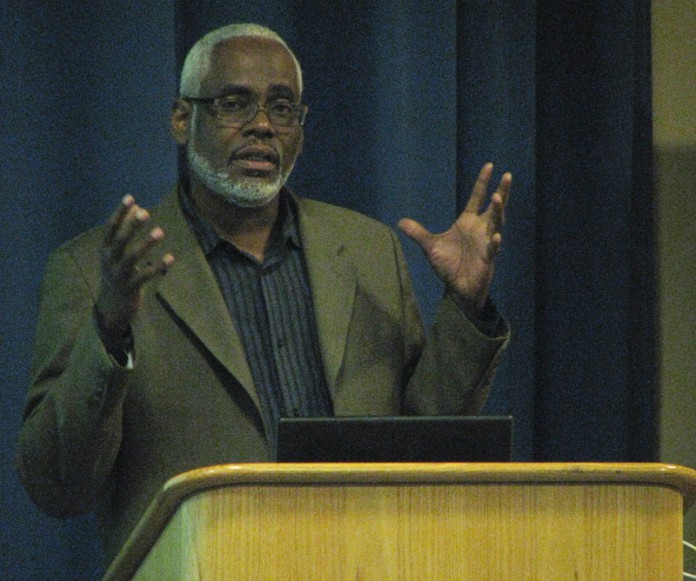 The contentious issue of racially-themed college parties and how students and administrators should best respond to them became a hot topic of discussion at a forum hosted by the Multicultural Center on May 11 at Embarcadero Hall.

The talk, entitled “The Compton Cookout And More: Race in the College Party Scene,” was part of the Multicultural Center’s “Race Matters Series,” and was hosted by a panel of students from UC San Diego to speak on recent acts of racism on their campus.

The topic in question was if the growing trend of racially charged theme parties on college campuses are really just “clean fun” or hints of more serious race related issues.

Woods worked with a colleague at UCSD to bring the discussion to UCSB after UCSD gained some notoriety in January of this year following a racially themed party organized by UCSD fraternity members called “The Compton Cookout.” Party-goers were encouraged to dress ghetto and in rapper-style clothing with big chains, gold teeth and other attire stereotypical of African-Americans.

“All race is, is a construction,” said Bostick, the fourth-year UCSD student said during the panel discussion. “We need to bring awareness to the false myths that surround and stereotype various races.”

A clip from the Spike Lee movie “Do the Right Thing” was shown to highlight examples of racist attitudes and name calling and to remind the audience that such speech, while normally used, are hurtful.

A short talk on the history of African-Americans was given by Dr. Woods, dating back to the period of slavery all the way to the Civil Rights movements in the 1960s. He focused particularly on minstrelsy, and how the use of minstrels promoted and justified slavery, a form of “naturalization of oppression and psychological terrorism.”

With Embarcadero Hall packed, the discussion lasted for about an hour and a half with many interested students posing questions and interacting with the panel.

The tension and racism precipitated by the party at UCSD and felt across campus afterword was also a major topic. Bostick, Keflezighi, Prescott and Ritcherson all touched upon the failure of UCSD to have a fair representation of African-American students, with African-Americans making up only 1.3% of UCSD’s total student population.

Prescott said as college students, this is the moment to take advantage of our time and energy to be bold and effect change.

Mayra Alvarado, a third-year Philosophy major at UCSB said she attended the forum because she has started to notice such parties and events taking place on the UCSB campus and that she herself has been a victim of name calling.

“Such behavior is inexcusable,” Alvarado said.

She said that events like the Compton Cookout shouldn’t have to take place for things to start to change.

“People justify their actions as fun… they don’t realize it is damaging.”

While UCSD has achieved the most publicity over its student parties, a recent racially charged theme party that took place at UCSB was also mentioned. The party, “Gangsters and Hoes,” was discovered on Facebook by a UCSB student who notified friends and members of the Black Student Union who in turn, held their own Facebook event, a silent protest against the party. The protest organized a group of about 60 to 70 people who stood outside the party with tape over their mouths and signs.

Afiya Browne, Co-chair of the BSU and one of the protest organizers, said that although she feels privileged to go to UCSB and generally feels safe, UCSB has its own share of problems and that the pool of faculty members and resources helps support students.
“You can’t rank racism,” Browne said. “But the type of environment and resources are key. I feel we are more welcome to students of color.”

Keflezighi said the goal of the forum was to open students’ eyes and empower them to make a positive change.

“Challenge yourself to be fluent in other peoples’ struggles,” Keflezighi said.