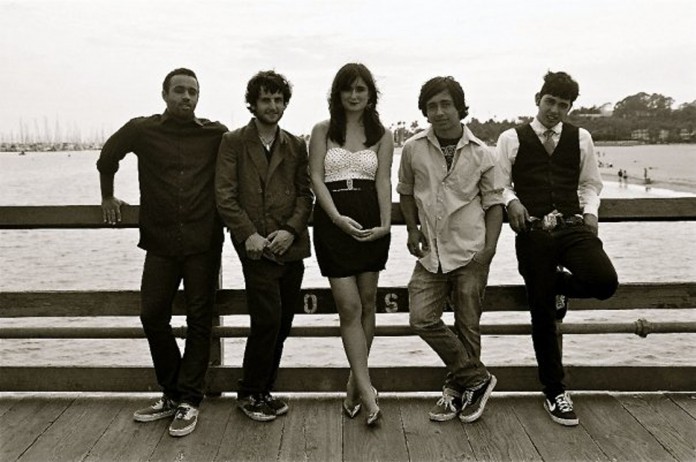 Shelley Flores
Lately, my ears have grown weary of the new songs that are coming out on the radio. It sounds like words are being meshed together, combined with a few beats in the background, and mixed with a few forced rhymes. Take, for example, a few lyrics that irritate me the most in one of Young Money’s latest songs, “Bedrock:”

‘I put her under, I see me with her, no Stevie Wonder, she donâ€™t even wonder, ’cause she know she bad, and I got her, grocery bag.’

Need I say more? Then came the realization that I needed to find better music to listen to before my ears fell off. It occurred to me that whenever I go out to I.V., I manage to pass by a local band’s show, but never really took the time to attend one. There is a lot of talent within the I.V. community and much of it is going unrecognized. Thus, I began my quest for audio enlightenment and this is what I found.
I came across a band called Black Velvet Sun, compromised of five talented musicians: Analise Nelson (vocals), Rudy Roquemore (guitar), Daniel Skippy Argueta (bass), Otoniel Otto Gomez (drums) and Max Josephson (keyboard). The group sent me a few of their songs to listen to and agreed to a Q & A interview.

Q: How long have you all been in a band?
A: Otto: Well, with this current lineup, it’s been about a year.
Max: We started freshman year of college with the original lineup. Analise and I are the only surviving members.
Analise: Yea, it started about 3 years ago, I have a friend named Megan and we were living in Santa Rosa in the dorms and she knew Max. I kind of knew Max but not that well. She knew I was trying to start a band she said, You should get together with this guy and play because he’s really good and we did and then slowly we added some people that he knew. The lineup has changed a couple of times but I have been in the band pretty much ever since it started.

Q:I have always been interested in how band names form so how did you come up with Black Velvet Sun?
A:
Analise: So actually, we used to be called “Some Friends of Mine.” And it was a really cute name, but the more we played together, the less I thought that fit. You know, that name was setting the theme for a really Indie band that played music that was kind of like Vampire Weekend and we were playing more with distortion pedals. And so, we had a song called, “Black Velvet Sun” and I think it’s about taking control of your own destiny and not being afraid of it. So, I thought it would be a nice touch. It was actually suggested by our old drummer and it’s been our name ever since. We still play that song today.

Q: How would you describe your music?
A:
Daniel: I’d say it’s like rock, indie and alternative.
Rudy: Analise brings classical themes into it. It sounds epic sometimes.
Analise: I would say we have a base and it would be rock and indie and then on top of that, we put in a couple of other ingredients. Like we have this song called Darling and it’s very 60’s and then we have a song that has a more classical feel. But when it comes down to it, we’re pretty much rock.

Q: As a band, what are your plans for the future?
A:
Daniel: Hopefully, make it.
Analise: (laughs) I like that. Honestly, music is my passion. Music is my life and I am really passionate about being in a band and making music together and sharing it with other people. For me, making it is just playing our music to as many people as possible. It’s not about winning Grammy’s or getting signed with any huge record label. It’s just about having a good time and getting our music out there and meeting new people.
Rudy: I like the sound of that. I mean, I would eventually like to play at cool festivals and stuff like that and as long as we had a little following that was down with us no matter how big the event was, that would be awesome.
Otto: I just want to keep the band together as long as we can. Right now I feel like we have a tight group. We can only get tighter. And recently, that’s what’s been going on I mean, we wrote like 3 songs in about a week. And it’s nice having to deal with the same people and not switching off.
Max: I feel like our plan is to hopefully go on tour sometime.

Q: It sounds like most of you want to go on tour. If you could play at any musical festival, where would it be?
A:
Daniel: Coachella.
Otto: Coachella.
Max: Coachella.
Rudy: Coachella, hands down.
Analise: I just came back from Coachella and just being there is an experience. You learn a lot about yourself there and I have only gone twice, but you come back a little bit different every time you go. To be a part of that would be such a huge honor.

Q: Do you have any creepy fans? If so, what’s the weirdest thing they have ever done?
A:
Daniel: I don’t think so.
Analise: We’re not there yet and I think that’s one thing that comes with time. It depends on what you mean by creepy. Creepy is like following you to the store or something, but I don’t think we have that.
Max: What about that time we were playing and that pirate and his really sketchy friend came in?
Analise: Oh my god! That was so weird! This was a long time ago, like 2 years ago or something and we were jamming at my house and the door was unlocked and the fucking pirate walks in!
Max: With his really sketchy friend.
Analise: And he was just like, “Hey guys!” and just walked into the house and started jamming and playing with us. It was such a surreal experience but right after he left we all just kinda looked at each other like, “Did that just happen?”
Max: And then we didn’t wanna like just stop playing. But he just stood there for a really long time so we just kept playing until he left.
Analise: Yea that was the whole idea we were like, “well it’s gonna be really awkward if we just stop so just keep going” and he will probably move on at some point.

Q: You have a show coming up on May 1. What can the audience expect?
A:
Otto: A pure adrenaline rush!
Analise: What you can always expect from us is ridiculous energy. It’s about getting the audience into our music and having a good time. People can expect to have a lot of fun and be brought in by the music.
Daniel: I think, compared to our recordings, our live stuff is way better.
Analise: Yeah, you can expect it to be ten times better.

After the interview, the band gave me a sneak peek at the set list they have prepared for their upcoming show. They performed three songs for me and I must say, their music is definitely infectious. I encourage everyone to support their fellow Gauchos by attending their next show on May 1 at the Biko house, located on the corner of Camino Pescadero and Sueno. The show starts at 8:30 p.m. and The Bottom Line will be there to record live footage and post it online. The video will be available at bottomlineucsb.com.