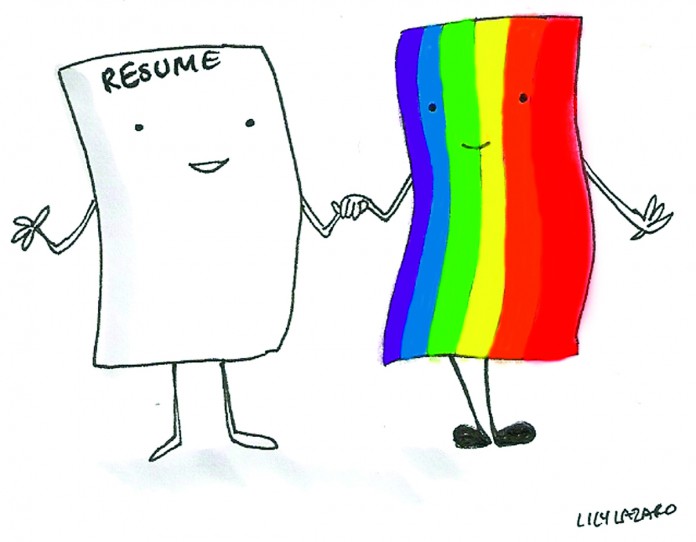 The economy is still doing pretty badly. The job market hasn’t recovered, and I will be graduating this quarter. In preparation for my departure from this beachside bubble of academia, I’ve been writing my resume and trying to figure out how to present myself to an employer. And even though my resume is in black and white, I find myself trying to deal with the rainbow flags popping up.

Coming to UCSB as a transfer student, I knew I had two years here, and I wanted to get involved in the campus community. As much as I loved Foothill College, after class, everyone vanished. The commuter school lacked a strong community and I wanted that here. I didn’t initially want to find that community in a political forum or designated safe space with rainbows dotting the walls; I wanted it through film. My first week here, I got involved in a production, and while I volunteered for the election campaigns in 2008, I thought it would be a short phase.

After Proposition 8 passed and same-sex marriage was banned in California, I felt personally attacked. On November 5th I missed a meeting to work on my film so I could march through IV with other queer students against Prop 8. The rainbow flags from then on were personal. Every LGBT advocacy group seems to tell us in different ways to come out, come out! From Harvey Milk to the Courage Campaign the idea is hammered in, if you don’t come out as queer, you can’t claim the power of the personal. Our greatest political power as a community is each individual owning the identity, advocating for their rights, telling their friends & family and being visible. It’s harder to hate someone you know.

So I came out in the rainbow bracelet. I began to attend protests. I organized a state-wide rally in SF during the oral hearing against prop 8. I networked like mad, documented other rallies. And right now I’m a political chair for the Queer Student Union (QSU) and the External Coordinator for the AS Queer Commission. Last year I was awarded the Emerging Leader Certificate from the Resource Center for Sexual and Gender Diversity and voted most likely to be seen at a rally by the QSU. I don’t say this to brag, but to explain. In my search for a space on this campus where I felt personally safe, I found myself in a politically tense issue taking a stand publicly. I gave many hours to queer activism and now when I sit to write my resume I have to ask myself should I continue this activism there too?

When trying to write a resume, we all have to try to figure out how to consolidate our skills, and showcase our talents. Not everything can be included due to the limitations of the format. In addition to trying to figure out which experiences are most relevant for the job I’m applying to, I also have to ask: How can I share what I’ve learned most in college without sharing about queer issues? While I don’t believe who I am attracted to should matter in the workplace, my experience of advocating for queer issues has also given me a great deal of training that can be applied to tasks within a workplace.

These thoughts inevitably lead me towards thoughts on Don’t Ask Don’t Tell. While I’m not in the military, have no immediate plans to enlist, and I agree with the idea that orientation shouldn’t matter in the workplace, Don’t Ask Don’t Tell isn’t about that. It’s not about desexualizing a workplace, it’s about censoring out an issue and hoping it will just go away. And the problems with Don’t Ask, Don’t Tell exist across the movement for queer rights. The fact remains that problems exist and if I make a choice to tell people about my personal life, it is far more likely to help me obtain rights than not telling, but by not telling I have greater safety and more employment opportunities.

Whether or not you’re queer, the choice of Don’t Ask, Don’t Tell has likely been presented to you, though the questions arising as personal and professional can blur. Do you censor your Facebook? Do you untag photos? What did you crop out of your resume, or which experiences that shaped you did you not talk about on your application essays? These experiences are all too common, and as of now I have yet to untag a photo or send in an application that cuts out the rainbow warning flags. I already told. So now what? Do I rewrite history and my resume to straight-wash a queer experience in order to increase my odds of employment? Or do I own my experiences and the skills gained through them? The economy is doing pretty badly and students everywhere are going to be asking themselves how to best present themselves. However, my fear is that in trying to figure out how to be the candidate employers want to see, we’ll stop being the people we want to be and unlearn the most valuable lessons from my time at UCSB.