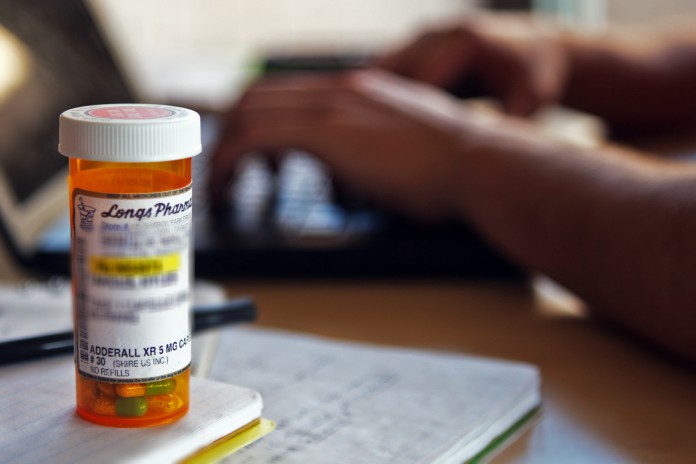 Many college students turn to Adderall as a way to get through their midterms or finals, finish a paper, or get important reading or studying done without procrastinating. Other students may even look to it as a weight loss pill, a way to get high, or even a way to amplify their activeness at parties.
For those who don’t know, Adderall is a commonly prescribed drug for the treatment of Attention Deficit Hyperactive Disorder (ADHD). Adderall is a useful drug for those afflicted with ADHD, providing focus, concentration, and a general sense of calm and relaxation. What many don’t know is that it also has various side effects that do not usually outweigh its benefits, such as lack of hunger, restlessness, dry mouth, or sleeplessness.

Adderall can be an effective ADHD treatment for those who are prescribed it, but the side effects affecting those who receive the pills from a friend to use as a “study drug” can vary from useful to quite unpleasant.
“It’s like heaven as far as studying goes,” said Dexter Cowell* a third year student. “Once I took a 30 mg capsule that lasted all day but I took it in the morning so I was just alert and focused all day.” Cowell also expressed that the drug allows him to become very creative, often enabling him to say whatever is on his mind: “When I take it, I become a social superstar.”
Coxwell also shared how he was able to acquire his Adderall prescription: “I don’t actually have ADHD, but I want Adderall, so I go in and see a psychiatrist at Student Health who gives me a prescription.”
Side effects of Adderall reacting with body chemistry and suppressing hunger was a commonly reported side effect from most students.
One UCSB second-year student, Natalie Pinkerton*, said that she has taken Adderall “quite a few times.”
“The first time I did it, I had bad side effects ‘cause I didn’t eat anything that day so I got a massive migraine during my final and almost passed out,” said Pinkerton.
Student Health’s Medical Director, Mary Ferris, had a lot to say about UCSB students’ abuse of Adderall, commenting that the drug was “dangerous and can cause heart attacks in excess.” Ferris added that Adderall can be habit-forming, and can be a gateway drug to other illegal prescription drugs. According to Ferris, the worst drugs to interact with adderall are cocaine, methamphetamines, ecstasy, and alcohol. These drugs, when combined, can multiply the individual effects (know as synergy), and can lead to serious side effects or drug overdose.
Student Health commonly prescribes Adderall to students who have prescriptions. However, they are currently trying to combat the misuse of Adderall as a study drug at UCSB.
They have had several conferences concerning the top study drugs (Ritalin, Adderall, and Vinase) ,discussing the medical indications and trying to make sure they are used appropriately and are not being diverted to other students. “Students get overwhelmed. Just because college is hard doesn’t mean you have ADHD,” said Ferris.
Whitney Bruice, a Counselor and Educator in the Alcohol and Drug Program at UCSB, states that UCSB’s Alcohol and Drug Program frequently counsels students who are addicted to Adderall.
Bruice emphasized that, although she did not feel Adderall was severely dangerous, it might not be wise to start taking it: “No students are overdosing on Adderall, and I don’t know anyone who’s died… It’s not a killer drug.”
Although there is a significant population of Adderall users at UCSB, many students who were interviewed expressed concerns about using Adderall, saying they would not choose to use the drug themselves in lieu of alternate methods.
“You can also eat certain foods that increase your attention and focus like blueberries and salmon, flaxseed, etc.,” said Erika Marty, a second year student. “So I think Adderall is pointless. It would be smarter to just eat a healthier diet that allows your body to produce those chemicals more and more easily.”
Adding to Marty’s statement, second year student Kyria Edwards said, “I have never taken it but I don’t believe in it personally. I want to get energy the NATURAL way.”
All of the students who were interviewed in the process of making this article said that even if they didn’t take Adderall themselves, they knew at least one other person who took it illegally. To have such a network of people who are habitually using the drug could be a legitimate concern for the UCSB community in the future. Students should be aware of the negative side effects associated with the drug, avoid mixing Adderall with other drugs, and be responsible with their experimentation with the drug if they choose to try it.
“I understand that it is normal for college students to experiment, and a single use is typical and probably won’t lead to harm, but be smart about it,” advised Ferris.
* starred names have been changed in this article for those students who requested anonymity.