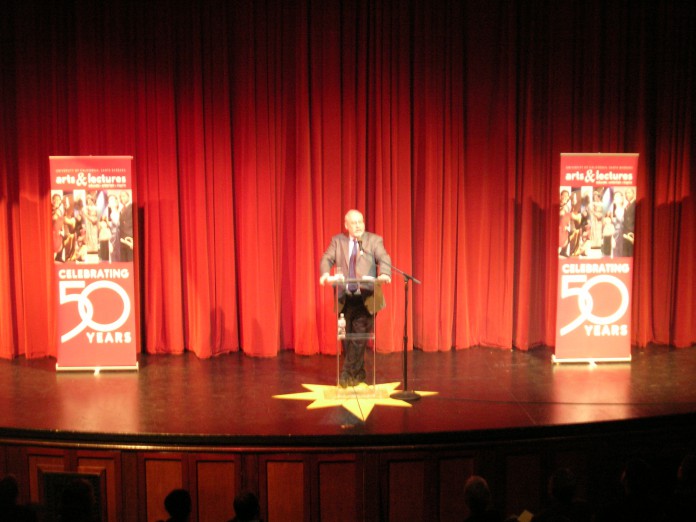 Alex Cabot
Renowned Economist and Nobel Laureate Joseph Stiglitz strongly rebuked the ongoing policy of disinvestment in higher education occurring in California and other debt-laden US states, as he addressed a packed house at Victoria Street theatre in Santa Barbara on February 19.

Dr. Stiglitz, who is currently on the faculty at Columbia University and has also served on the Council of Economic Advisors to President Bill Clinton and as Chief Economist at the World Bank, was lecturing in Santa Barbara at the behest of UCSB Arts and Lectures. Stiglitz outlined what he believes were the principal contributing factors to the financial crisis of 2008 and the ensuing recession that followed it, articulating arguments that he has made in greater depth in his recently released book “Downfall,” copies of which he was also signing at the event.

Most of Stiglitz’s arguments have by now become common currency in discussions about the events of the last several years; deregulation of the financial sector, perverse incentive schemes at the nations top banks, overly loose monetary policy, securitization of mortgages and other consumer debt instruments, and worst of all, the widespread belief among senior bankers that their institutions were “too big too fail” i.e. in the event that their overly risky investments sunk the proverbial ship, Uncle Sam would be forced to step in and rescue them, which is what in fact ended up happening.

More relevant to the current national debate was his take on the ongoing stimulus spending in Washington, which many Americans have criticized as profligate and wasteful. Stiglitz argued that on the contrary, the stimulus bill passed by Obama during the first weeks of his administration was absolutely necessary in preventing a full-fledged depression, and if anything it should be extended instead of being cut back. His chief criticism of the stimulus was its failure to invest in education by subsidizing K-12 school programs as well as state universities such as the University of California.

“Compare the difference between policy in the US and the United Kingdom, where unemployed youth are kept in job training programs,” Stiglitz said. “Universities are the main strength of the US economy, and every young person should be in school or some kind of job training program.”

His implication was that once economic growth picks up again in the UK, its economy will have a more highly skilled workforce that will help it achieve higher levels of output, an outcome that will likely stand in stark contrast to an economy such as California’s, where budget cuts throughout the UC and CSU systems are forcing students to drop out of school in record numbers even though few will have any chance of finding gainful employment in the mean time, and the value of their future earnings will be compromised as a result.

Stiglitz alluded to the pain facing Americans under the age of twenty-five at the beginning of his lecture, arguing that even though recent college graduates will have a better time finding long-term employment than their less educated counterparts, the positive spin emanating from Washington that the recession is over and the economy is on the mend minimizes the chronic unemployment that still bedevils entire sub-demographics of American society, in particular its youth.

“An astounding one in two Afro-American youths is currently unemployed,” Stiglitz declared as he opened his lecture. Anyone in his audience who has witnessed the ongoing struggles over cuts in the state education budget, including at the U of C, may have noticed a cruel irony: blacks account for 29% of the population of the California prison system, according to the California Department of Corrections and Rehabilitation (CDRC), despite comprising less than 7% of the total population of the state. Prison overcrowding has forced the state to cut funding for education, which in turn has perpetuated severe unemployment among California’s black youth, a disturbingly high percentage of whom ultimately commit crime in order to make ends meet, and in doing so end up in the custody of the CDCR, which in turn leads to more prison overcrowding.

Stiglitz acknowledged that his predictions about an emerging real estate bubble throughout the middle years of the last decade caused many optimists to label him a permanent ‘prophet of doom,’ making it all the more poetic when his predictions turned out to be right. Even in spite of this validation Stiglitz has tried to refrain from sounding overtly alarmist, but when he spoke in Santa Barbara he made no bones about the perilous condition in which the US economy continues to find itself.

Most pointed was his criticism of Congress and the Obama administration over their failure to institute new financial regulations that will minimize the likelihood of a repeat of the events of 2008 in the future. He argued that in examining a broad history of financial crises and painful busts that have occurred throughout US history, the forty-year period following the Great Depression stands out as a period of relative calm, which happened only because of the tight regulations imposed on Wall Street and the banking sector following the stock market crash of 1929.

Stiglitz reported that at present, government insured banks are still being permitted to engage in ‘proprietary trading,’ which means making trades with their own capital, and in doing so exposing themselves to enormous risk; that they continue to use ‘OBDs,’ or Off-Balance Sheet Derivatives, which conceal the true nature of their finances from regulators and investors; and that worst of all, that executives are still being paid enormous sums of money based on the short term performance of their companies while their long-term health may be on shakier ground.

Stiglitz blames the failure of congress to pass meaningful regulation on the fact that the financial industry has such enormous political influence in Washington, where there are roughly five highly paid banking lobbyists for each congressman. He mentioned that when the US government finally bailed out American Insurance Group (AIG) in September 2008, an action that principally benefited the major investment banks that were heavily exposed to the insurance giant, that the ultimate cost to the government was greater than the aggregate total of its foreign aid budget for the entire continent of Africa over the previous twenty-five years!

Despite citing a laundry list of additional concerns that he has about the future direction of the economy, Stiglitz asserted that the future could still be bright if the current crisis, which he described as a “near death experience,” causes policy makers to make better decisions in the future. In addition to sounding off about the merits of investment in education, he also cited America’s unique history of entrepreneurship and technological innovation that has permitted its citizens to enjoy such a high standard of living throughout its history, and which may yet help America find its way out of the fiscal hole into which it has dug itself. Given California’s position on the cutting edge of technical and scientific achievement, and in particular the role that the University of California has played in that process over the years, hopefully some university official in a position of real authority was in attendance.