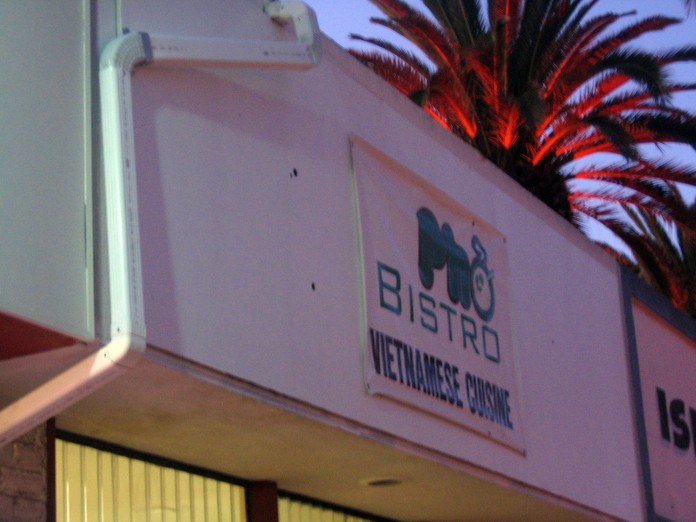 Autumn, to some, evokes feelings of change: students start school, farmers harvest summer’s bounty, and you can’t wear white anymore. As the temperature drops, even in California, my thoughts inevitably drift to pho.

Pho, for the uninitiated, is superficially quite simple. It’s a type of Vietnamese beef soup with rice noodles, served with a variety of condiments, including but not limited to crunchy bean sprouts, piquant peppers, and minty Thai basil. Like most of the world’s great dishes, it was born out of poverty. In an effort to extract every bit of flavor and nutrition out of a cow’s various odds and ends, pho emerged. But this is pho done right: broth lovingly and painstakingly cooked for hours, carefully seasoned, and then gilded with extremely fresh beef and condiments. It’s not always this good, and that in a nutshell is the phodown’s raison d’tre.

What a phodown boils down to is separating the good pho from the bad, calling out a lazy restaurant for its bad pho, and highlighting the superstars of the pho world. A bit more systematic and empirical than a traditional restaurant review, a well executed phodown breaks down pho into its constituent elements, rating each one to determine a composite score. Traditionally, these elements include the following: broth, noodles, beef, condiments, and service/atmosphere. Once all of these variables are measured, a pho-hound can pick and choose pho restaurants based on the variables that matter most. For instance, if a pho connoisseur thought broth was the most important part of pho, he or she could go to the restaurant with the best broth. But if this same person was entertaining a friend who just wanted good service and a nice atmosphere, well then he or she could look at that variable. A good phodown aims to please.

I have learned over the years to not take a phodown lightly. Done right, it is simultaneously a terrible nightmare and a carefree paradise. Even while exploring new epicurean heights, one’s body can simply crumble under the sodium intake. A great man once went as far as to compare a phodown to the 160-game professional baseball season  the sheer grind of it is oppressive. And I think he may have been underselling it.

But I’m thinking and hoping that a phodown in the UCSB area should be a tad easier. With only five pho joints that I know of, it may be more of a spring training, or perhaps a primer for a larger, down to come. Either way, the UCSB phodown begins, for better or worse, at IV’s Pho Bistro.

Pho Bistro is an unlikely pho. In a part of town best known for IV classics like Freebirds and Woodstock’s, an upstart Vietnamese restaurant doesn’t exactly fit in. That’s not to say it doesn’t make sense, instead of a regular chicken burrito, why not purchase a hearty bowl of pho instead? Besides location, Pho Bistro forges new ground in terms of atmosphere. Tradition dictates a hole-in-the-wall approach to pho restaurants: cafeteria style seating, a fish tank, a few posters depicting Vietnamese vistas, and a surly but efficient staff. But don’t get me wrong, I welcome advances in pho. I like that Pho Bistro is trying new things. Sometimes I want to eat pho in a trendy little restaurant, brightly lit with overhanging lights, minimalistic seating and a cute blond waitress. And as for the location, I love that it’s convenient and close to campus. But there was just too much wrong here to overlook.

To begin with the obvious, Pho Bistro doesn’t have restrooms. Verging on the illegal and certainly inexcusable at a pho joint, lack of facilities has to factor in negatively on my service/atmosphere score. I would have also liked to have seen little bowls for dipping, and while the restaurant actually had a dispenser for these at the table, it was filled with (gasp!) forks. I would also like more options for my pho. Both a lack of a pho size option and an insufficient variety of meat choices reduces the chances I’ll find something I want. A final mark of shame was the appearance of wooden, disposable chopsticks, another cheap little no-no at this supposedly trendy pho-bistro. Thai, my phodown companion and noted pho traditionalist, was less forgiving than I with his service/atmosphere score (he also opined the lack of free tea), and honestly, I found it difficult to disagree.

As for the pho itself, Pho Bistro does know what it’s doing. The broth, although far from divine, was better than I expected. Full flavored and meaty, I could tell it had been cooked a long time, but it lacked in terms of aroma and spicing. I gave highest marks for the noodles, which turned out excellent, not at all clumpy and in perfect proportion with the broth. Someone in the kitchen clearly knows what he or she is doing.

If this pho had one clear failing, it was the meat, which disappointed in both amount and quality. The rare beef was rare in the wrong sense of the word, far too meager and chunky. Proper pho beef is cut so thinly it cooks nearly instantly when hitting the hot broth. The brisket was also too thickly sliced and strangely spongy. And tendon? Although a pho classic, it is not even an option here. Condiments were fine, fresh, and with a much appreciated jar of chili sauce, nothing to complain about. I would enjoy, however, a bit more basil and hot pepper.

Eschewing traditional pho environs in favor of a modern atmosphere is not necessarily a negative. But when this move has side effects that hinder what should be a perfectly decent bowl of pho, then there is a problem. I would have nothing but praise if Pho Bistro had managed to do the basics while sporting its new school charm, and one day it just might pull this balancing act off. But until then, it represents an inauspicious start to the phodown.