I walked into the movie theater with as many expectations about this mysterious, highly anticipated movie as most monster movie fans, but had no idea what I was about to see. While Cloverfield had plenty of explosive, city-destroying scenes with a giant, terrifying monster roaring malevolently at the civilians and soldiers scrambling around its feet, we are also given something generally unheard of in theaters; a completely first person perspective of one group of normal, everyday people as they attempt to survive this unforeseen catastrophe in a New York City not unlike the one we all know today.

The story begins in a Manhattan apartment building, at a going away party for the main character, Rob (played by Michael Stahl-David). After an essential amount of awkward, melodramatic scenes that help us form impressions of the characters, the party is interrupted by a series of ominous quakes and fiery explosions coming from nearby; soon after the journey of five young New Yorkers’ attempting to survive what appears to be a giant, terrifying monster attack begins to unfold.

The rest of the movie continues with only the video recorded by these five young people, and yet it still manages to document the fight against a monster ravaging the city in a very full-bodied, realistic way. With the jarringly familiar unsteadiness of a camcorder recording something as extraordinarily catastrophic as a giant, vicious creature, it will have you scouring every scene for more visual information to help you fully comprehend what the people filming it are experiencing.

Yet another noteworthy aspect of the movie is the perfectly executed special effects. Never for a moment do the explosions or tearing apart of massive skyscrapers look staged or animated; even the epic propulsion of the Statue of Liberty’s head down a city street leaves you astounded with an utterly realistic, landing (even more ironically realistic is the shot of dust-covered pedestrians taking pictures of it with their cell phones).

The story is pieced together so flawlessly that it never feels fake or acted out, everything that is happening feels like it happened without being edited together. A credit to J.J. Abrams and others responsible for this film was their ability to weave in subtle foreshadowing and other nifty little hints about the creature itself that seems to remain unknown and unintentionally recorded by the characters themselves without disturbing the natural flow of the events taking place.

While the movie is fairly short for being such a groundbreaking piece of work, the intensity of every scene pulls you in so that it feels much longer, you feel as though you’ve lived through every adrenaline-packed moment with the characters as they struggle to escape the city. By the end of the movie, I knew that my expectations for this “monster movie” had been blown right out of the water along with the head of the Statue of Liberty; Cloverfield is not just another attempt to Americanize Godzilla, it is an artistically portrayed version of what a real monster attack would be like in the world today. If by the end of the movie it didn’t exactly meet the diehard movie fans expectations, it in no doubt left them thinking “you know, if a terrifying behemoth ever did attack New York City, it would definitely look something like this.” 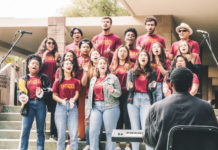 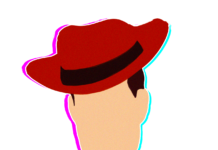