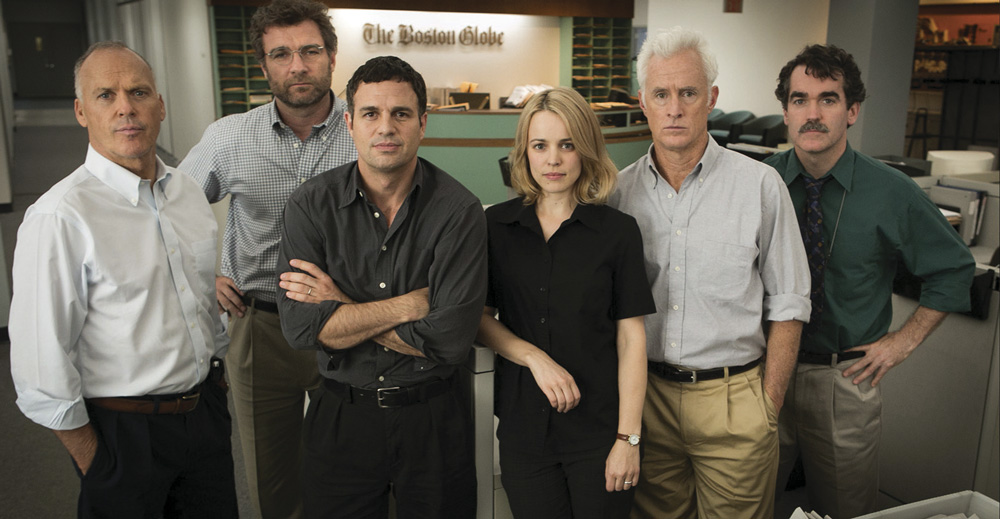 On Fri., Feb. 5, the Carsey-Wolf Center brought Spotlight to the University of California, Santa Barbara with its “Script to Screen” series. Students and patrons alike gathered in Pollock Theater to watch a screening of the Oscar-nominated film, Spotlight, and a Q&A facilitated by Matthew Ryan with its screenwriter, Josh Singer (also nominated for best original screenplay).

Singer has written for well-known shows such as Fringe, The West Wing and Law and Order; he co-wrote Spotlight with director Tom McCarthy. They each spent a great deal of time getting all of their facts straight and perfecting the screenplay to make it as accurate as possible.

The film follows the journalists of the Spotlight team on the Boston Globe who exposed the corrupt lawyers and church officials who covered up countless acts of pedophilia performed by priests on young children. Not only does the film show the viewer exactly how the story was discovered and handled, but it also conveys the shortcomings and doubts of the journalists at the Boston Globe.

Going right along with the superb screenplay, the film does not fall short with its cast. The Spotlight investigative journalist team consists of leader Walter “Robby” Robinson (Michael Keaton), Mike Rezendez (Mark Ruffalo), Sacha Pfeiffer (Rachel McAdams) and Matt Carroll (Brian d’Arcy James). The team is supervised by Ben Bradlee, Jr. (John Slattery). Though this may seem like a laundry list of actors, every single one played their character marvelously, and supported each other with ease.

Other standouts in the film include Stanely Tucci, who plays eccentric lawyer Mitchell Garabedian, and Liev Schreiber, who plays newcomer Marty Baron, editor-in-chief of the Boston Globe at the time.

Even if you already know the story, the film is an edge-of-your-seat, intense movie that will keep you interested throughout the entire two hours and eight minutes. There are several moments of comic relief that I found very well-placed and enjoyable, and the organization of the film made it easy to follow and exciting to watch.

Probably one of the biggest reasons this film was enjoyable was the realism of the dialogue and the quality of the acting. During the Q&A portion of the event, Josh Singer emphasized the vision of authenticity that Tom McCarthy had for the film that is clearly translated onto the screen.

Singer and McCarthy each spent weeks in Boston with the real journalists from the Spotlight team in order to make it as accurate and believable as possible. Singer even said that many of the journalists spent time on set while the film was being shot to make sure that it was realistic, and to make sure that the actors (who also spent plenty of time following around their respective characters) were doing their roles justice.

The amount of research that went into this film is apparent not only from what Singer told the audience, but from the dialogue and methodical filming of the scenes in the newsroom. There are also a lot of themes that are prevalent in the film that Singer said they worked hard to make known. The film definitely deals with dynamics and tension between outsiders and insiders.

In response to a question regarding this theme in the film, Singer said, “We thought a lot about outsiders and insiders here. I think that one of the interesting things about these sorts of stories — it’s something we were focused on early on — you know, the church was, and I think continues to be, somewhat of a bad actor here, but there are all sorts of people who are enabling that bad action.”

There is so much more to this film, and it is apparent that Singer worked closely with McCarthy on the screenplay to make it what it is. As a closing comment in relation to his favorite memory of a film, Singer said, “I love movies because, hopefully, they can get us talking about important issues.”

Spotlight definitely deals with important issues, and it is worth a watch if you are into journalism, or if you just want to see a great movie.