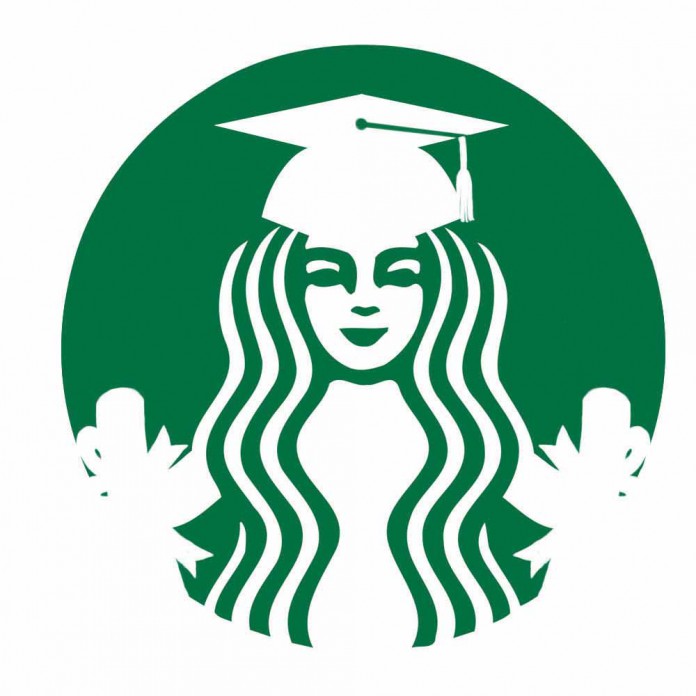 Earlier this month, coffee conglomerate and college term paper fuel manufacturer Starbucks announced a collaboration with Arizona State to enroll any of their American employees in the university’s online classes, and cover all their tuition costs in the process. The joint effort is called the Starbucks College Achievement Plan. The partnership is a much appreciated second chance, as well as a publicity move for Starbucks, which employs over 100,000 young Americans who do not have a college degree. Many of these formerly enrolled employees say money is the reason they dropped out of college, while others lacked guidance and external support, leading to built-up anxiety and confusion.

The program addresses one of the most difficult problems facing young people from lower income backgrounds: ascending the metaphorical economic ladder with little to no financial support from their family. The great majority of reasonable attempts to improve one’s economic standing start with attending a college or university, but unless they can earn enough scholarships to cover the cost, lower income students are forced to shoulder the burden of student debt, a mental and fiscal pain their well-off peers will never face. Attending college was not always so exorbitantly expensive. As recently as 1993, the average cost for attending a University of California was a little over $4,000, adjusted for inflation, compared to a little over $12,000 in 2015—a 300 percent increase.

Under the plan, admitted Starbucks employees will receive reimbursement for their tuition fees through their paycheck every time they complete 21 units, and will receive guidance through an enrollment counselor, a financial aid advisor, and an academic advisor. The advisors and reimbursement act as a substitute for a wealthy family member, providing both reasoned advice and monetary support. However, the reach of the program is limited, and so far only 2,121 employees have enrolled—a little over 1 percent of Starbucks’ American workforce.

Through the College Achievement Plan, Starbucks is molding itself into what younger workers expect out of the coffee chain: a temporary stepping stone on their longer path to loftier career goals. Instead of simply contributing a sliver of their massive stockpile of money, accumulated through millions of individual pumpkin spice latte addictions, to the college funds of their youthful baristas, Starbucks is packaging higher education into their employment contracts (if you meet test requirements of course). Unfortunately, the scope of the plan only covers the online degrees at one university, but what if the plan was implemented by more companies with different universities?

If businesses start covering their workers’ college fees in a program similar to Starbucks’, then students who earned high enough test scores to gain admittance to a university would not be held back by a low-income background. If implemented on a large scale, many bright underprivileged individuals would only need limited, if any, college loans. Working at low wage, teenager-style jobs could directly lead into a valuable bachelor’s degree, eliminating the impact of income inequality on higher education and providing the masses with enough knowledge to reverse America’s reputation as a horde of ignorant douche bags—that is, if the capitalist companies capable of such an undertaking decide it’s cost effective and worthwhile of their time and effort.

History teaches us that it is foolish to expect the haves to help the have-nots. Although, if Starbucks has already created such a program, it is not far-fetched to assume other companies will follow suit in the future. Paying for college tuition would increase their standing with young people, after all. So let us hope that the greater needs of the population eventually take precedence over corporate greed, but in the meantime, we might be put on hold for a while.