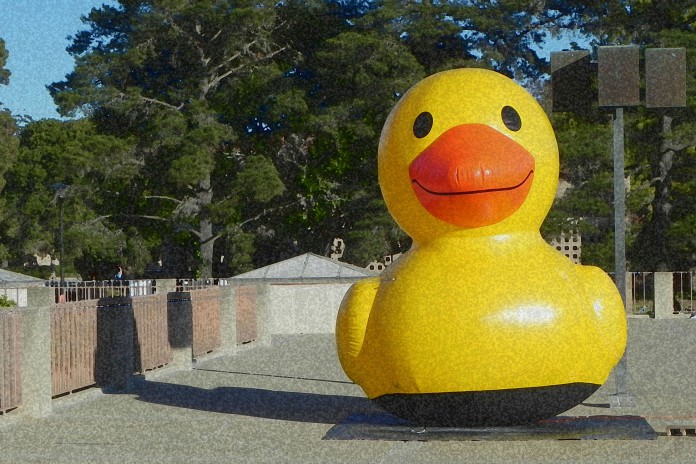 The image of a dazzling yellow, lifeless rubber duck floating among heaps of foamy bubbles in a bathtub is one most people are familiar with. This nostalgic snap shot has become something associated with the innocence and simplicity of childhood. For Donovan Hohn, author of the non-fiction work “Moby-Duck,” this bath toy captivates his imagination as he embarks on a three-year odyssey in search of these elusive playthings upon the treacherous oceans around the globe.

The inspiration for this former English teacher’s journey stems from an event that occurred in 1992. The tale is that a cargo ship carrying countless amounts of crates filled with various consumer goods was blitzed by a perilous storm as it ventured across the ocean. When the ship clashed with the tempest, one of its crates carrying 28,000 rubber bath toys, including beavers, turtles, frogs and of course, ducks, fell overboard and plunged into the unforgiving sea. Hohn becomes so enamored with this image of a child’s toy bobbing about the ocean that he resigns as a teacher and bids his family farewell to embark on a quest to find out what happened to these objects. What he discovers along the way is the dangers that the effects of plastic have upon the ocean because of their inability to erode naturally. Hohn describes the severity of plastics that litter the ocean in a straightforward manner. ??

“The problems are chronic because unlike the marine debris of centuries past, commercial plastics persist, accumulating over time, much as certain emissions in the atmosphere,” writes Hohn. ??

During the course of his adventure, Hohn is able to rub elbows with scientists, environmentalists and even toy manufacturers, as he finds himself within the unfamiliar waters of careers where he has limited knowledge. However, he does display sponge-like characteristics, as he absorbs as much information as he possibly can.

Even though Hohn’s journey has taken him miles away from the classroom, he still finds instances where he lets his literary prowess shine through. The text is infused with numerous references to the literary giants of American storytelling, including such names as Henry David Thoreau, Edger Allen Poe and Herman Melville. The rich and insightful quotations of past authors Hohn scatters throughout the course of his texts become the antithesis for the harmful plastics that the reader learns are strewn throughout the ocean. Hohn pays a special homage to Herman Melville’s “Moby Dick” during the course of the story, which is undoubtedly where the parody title “Moby-Duck” comes from. Hohn parallels his journey with Captain Ahab’s, as they are both men on an adventure, seeking to find mysterious beings upon the sea. Captain Ahab’s ferocious sperm whale may be a bit more chilling, but the analogy works all the same.

Hohn’s narrative style is one dedicated to presenting the facts, which works suitably in his search for the rubber bath toys. His former profession as a school teacher without a background as an environmental activist or scientist also works in his favor because the reader, who is probably also not an environmental activist or scientist, is given the unpresumptuous words of an individual that most would find it easy to connect with. ??

Hohn’s entire journey becomes an exercise for learning about how the ocean environment is infected by plastic products, which causes harm to not only sea life, but also to coastal regions that become littered with waste. Without a doubt, his tale is designed to inform the readers about the dangers that humanity presents to the natural ecosystem of the ocean, but the audience also begins to desire, along with the amateur-yet-bold Hohn, to learn how the infestation of plastic in the ocean is affecting the environment. It’s refreshing that Hohn does not come off as preachy; rather he looks to deliver facts from professionals that have dedicated their careers to keeping the ocean clean. This learning experience is, of course, beneficial to the reader, but Hohn makes it clear that his journey has changed his own perspective on how humans treat the ocean.