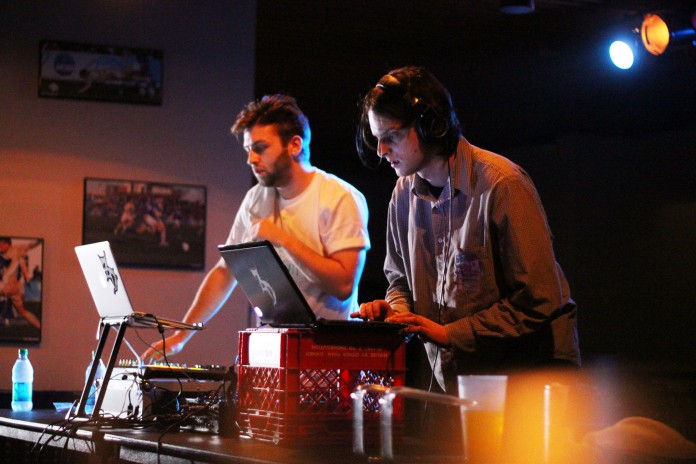 Forget rock ‘n’ roll, the new youth anthem has become sex, drugs and dubstep. A new era of electronic “filth” has penetrated the world of music and underground debauchery. University of California Santa Barbara dubstep fans got more than their fill of their brand of musical joy when Toronto-based duo Zeds Dead visited the campus for an intimate concert in the Hub Oct. 25. Dominating their venues with heavy, explosive beats, Zeds Dead has carved a notably new and raw presence onto the genre’s frontier.

Zeds Dead’s team of two DJs, “DC” and “Hooks,” has been flexing their creative input on revising and remixing mainstream tracks since 2004, under the former stage name of Mass Productions. In 2007, the duo released an independent album named “Fresh Beetz.” Continuing their collaboration, they extended a second release in the summer of 2009 under the new title “Zeds Dead.”

Zeds Dead’s legacy of international influence over the electronic dance music scene has since expanded exponentially. Topping charts on Beatport, garnering millions of YouTube views and featured on FM Rinse, BBC Radio 1 and GQ Magazine, Zeds Dead has received heavy airplay in the synthetic music world. Along with gaining vast popularity, Zeds Dead has also pioneered a weekly party called “Bassmentality” at the Toronto venue “751,” famed for hosting other high profile EDM, or Electronic Dance Music, artists such as Skrillex, Nero and Netsky. Other partnering dubstep artists currently working and touring with Zeds Dead from their native Ontario include The Killabits, who launched a powerful opening performance right before Zeds Dead came on in the Hub last Tuesday night around 10 p.m.

As doors opened at 9 p.m., packs of dedicated partiers rushed towards the stage, grinning, laughing and dancing, as DJ after DJ had their chance to fill the atrium with vivid sound and electronic intoxication.
Local Santa Barbara talent DJ Audio Pool immediately cast his own thick fog of sonic filth into the eager crowd. Numerous groups of young people channeled every speck of the dubstep’s grind and screech into a powerful sequence of fun and erotic dance moves.
As the local DJs concluded their sets around 11 p.m., two dark figures swiftly approached the stage from the crowd, climbing up to the turntables.
Zeds Dead needed no introduction. The hall let out a roar of wild approval as Zeds Dead grabbed their mics. Said one, “We came all the way from Canada to pick a hole in your f***ing speakers! Let’s go!”
The lights flickered. The ground shuddered. The bass let out a deep, solid groan as the first trail of songs came bleeding out across the dance floor. Girls and guys alike dropped low, all hands up in the air. No feet were unmoving, no faces were indifferent and most importantly, no sanities were left intact.

Speakers pumped away aggressively as a deep plunge of chorus melted into “Rudeboy,” Zeds Dead’s first official release, which features Canadian rapper Omar LinX. Then the DJs ignited a continuous stream of crowd energy with the recent remix “Eyes on Fire,” by Blue Foundation. The remix came gushing out to the screeching line of girls and boys who grasped over the shaken barricade that seemed to come between them and total euphoria. ??    The stage was no less wild. Zeds Dead moved rapidly from genre to genre, mixing new tracks of reggae and alternative right off their fingertips, as they too head-banged while fisting the air, hair flying in every direction. There was not a still moment.

Zeds Dead left no song untouched. As the familiar sound of Nero radiated off the stage, the crowd called out in unison, “innocence…innocence, you’ll never be mine!”
When their new release, a remix of Kid Sister’s “Daydreaming” began playing, the DJs continued their uninhibited dancing atop the speakers, amidst the haze of cannabis smoke that permeated the air. Towards the end, the audience threw their hands up in powerful unison, using both hands to create a “Z” formation, in complete support of Zeds Dead. The classic energy of pure UCSB spirit and the interactive energy of Zeds Dead combined to fuse something explosive, wild and voracious.
One of their last songs, “Bassmentality,” which pays tribute to their Toronto roots, ignited the crowd once more. DJ Hooks spun the turntables faster and faster, to a screaming sea of approval. Meanwhile, DJ DC jumped on top of a speaker, mic in hand, screaming, “UCSB!!” as he plunged head first into the crowd, moving along waves of open hands.
“It was so sick. I don’t even know where to begin. They were so good. Completely killed it,” said UCSB fourth-year Eddie Reesman. Students left the event still trying to describe what they had just encountered for the past three hours.
The satisfaction was indescribable. Raging on a Tuesday night, while experiencing Zeds Dead up close and personal, was liberation at its finest.

‘Furious 7’ and Five Other Films Who Deserve the Same Sequel...