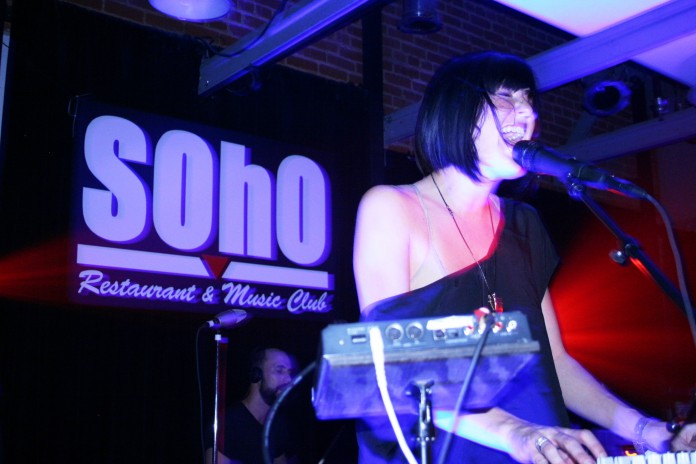 The Phantogram Show at Santa Barbara’s SoHo Restaurant and Music Club on Nov. 3 definitely confirmed it’s cool to “have a mouthful of diamonds and a pocket full of secrets.” The electronic rock band Phantogram left their small hometown of Saratoga Springs, New York to kickoff the three-day New Noise Digital Music Conference & Festival in Santa Barbara.

Coast to coast travel is now routine for the touring band, who has gained increased notoriety over the past few years, for good reason. Eager fans seeking tickets waited patiently in line for two and a half hours at the sold out intimate music venue.

According to fourth-year art history major Fiona Riskin, it was well worth the wait.

“I thought they were a really good live band, and since the place was small, we could get super close,” said Riskin.

At SoHo, the stage lies between the cozy bar and outdoor patio, so the audience experiences much more than a simple concert: they get an awesome dance party as well. The SoHo venue is distinguished for the feeling of getting up close and personal with your favorite bands, on and off the stage.

Between the opening band, Reptar, and headliner Phantogram, the energy and music of the entire night surpassed already high expectations.

“I wish I could see every concert at SoHo, because you’re up so close to the band,” said fourth-year feminist studies major Jessica Moore. “Phantogram was awesome and sounded so much better live.”

Reptar performed hits off of their EP, “Oblangle Fizz Y’all.” Between their enthusiasm and the setting, it seemed as if the crowd was experiencing garage band practice. Admittedly, it took quite a while for the band to prepare in between sets and finally start playing, but the social environment made up for the performance break.

But as soon as Phantogram took their place, overhead lights dimmed, fog crawled along the stage and the highly anticipated part of the evening began.

Sarah Barthel and Josh Carter, whom make up Phantogram, showcased songs from their upcoming album, “Nightlife,” as well as songs from their 2010 debut album “Eyelid Movies.” While older, well-known songs such as “When I’m Small,” and “Mouthful of Diamonds,” were obvious hits with the crowd, those that were newly released were equally well-received. Their latest single, “Don’t Move,” was the ultimate highlight of the show. The entire crowd began singing along to singer Barthel’s husky vocals, whose sound is comparable to Karen O of the Yeah Yeah Yeahs.

The concert ended with a rocking audience-demanded encore, and although their set ended past midnight, the crowd was still calling out, hungry for more.

“I recently just started getting into Phantogram, and their dream pop influence, hip hop beats, and honest lyrics got me hooked immediately,” said second-year communication and film major Detiny Aragon. “I was in the front row, directly in front of the lead singer, Sarah Barthel, and my expectations were definitely surpassed. The lighting was amazing, and the energy was non-stop throughout the whole set. It was my first time at SoHo, so all in all, it was an awesome night.”

Shatner Gives Performance That Is Out of This World