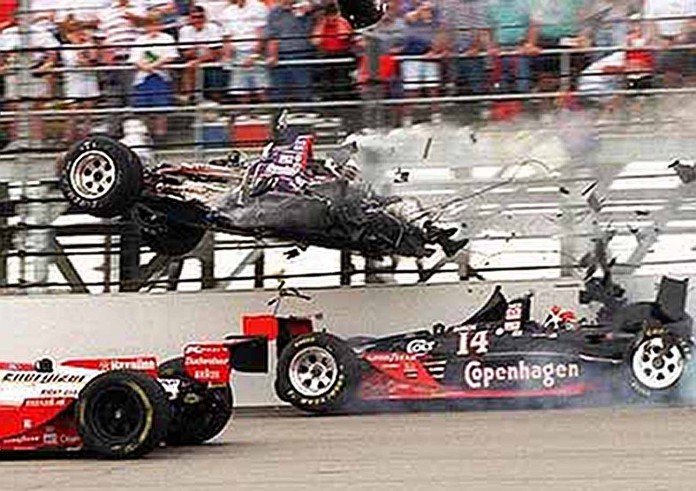 The United States has laws against speeding, yet IndyCar drivers strive to be the fastest, as they are wildly barreling around the track at over 200 miles per hour. To what end? Is it the entitlement, the money or the fame? Does the thrill of risk lead someone like Dan Wheldon to push the limits of man-made machinery and his own concentration? Regardless of the racer’s motivation, people come from all over to watch these epic races take place– for the very reason that they are epic. When lives are at stake, the interest and entertainment increases. What kind of sick sport is this?

At the age of 33, British IndyCar racer Dan Wheldon was killed in a multi-car accident on the Las Vegas Motor Speedway on Oct. 16, 2011. About a dozen cars spun out of control, some bursting into flames, others tumbling like fallen logs. The only fatality was Wheldon, his cause of death reported shortly after he was airlifted to a nearby hospital as “blunt force trauma” to the head, inevitable when an automobile moving at such high speeds hits a stationary object. Although his career ended so tragically, he left the world having won the Indy 500 in both 2005 and 2011. He was no stranger to the race– he grew up as a speed demon and sadly died as one too early.

However, his death is not the first of its kind. Although safety standards continuously increase and evolve, there is no denying the inherent danger of motorcar racing. It is a commonly known fact that fast, metal objects pose serious risks. Modern cars that humans use out of necessity in today’s society come with safety requirements and features that undergo many test runs before being put on the market. Laws have also been made to decrease the risk of car accidents. Police officers enforce speed limits and traffic laws, as well as the use of a seatbelt. These careful precautions are made to keep us safe when we’re on the road. Yet, some revel in the adrenaline rush when the racers hit the track for the experience of the rush itself. It is not ignorance of the dangers of high-speed motorcar racing that keeps the “sport” thriving and raking in millions but it is the possible occurrence of dangers that makes it famous.

On the other hand, racecar fans mourn the loss of Wheldon, as they would any racer who perishes on the course. It is human nature to feel sadness at the loss of an idol and good man, reckless though he may be. After all, within each of these competing cars is a driver, a human with a life and a family like Wheldon, who left behind a wife and two little boys. The second tragedy of this accident is that his death could have been prevented. It’s possible he may have had an untimely death from some other cause, but his chances greatly increased with every breakneck turn around the racetrack.

The crowd always supports the drivers with cheers in victory and grieving a loss. But in this case, it is an unnecessary loss. Perhaps Wheldon’s life would have been greatly different if he chose another career. He may still be alive today. If our society did not celebrate or condone this risky sport, more deaths could have been prevented and been spared. Drivers, spectators, ground crew and track workers have been killed and injured during these events. Indy cars don’t stop as fast as they start– their fuel catches fire, their wheels lose grip and spin out of control and the lightweight metal shell crushes upon impact. This kind of sport is not something to take pleasure in. Risking lives is not a game.