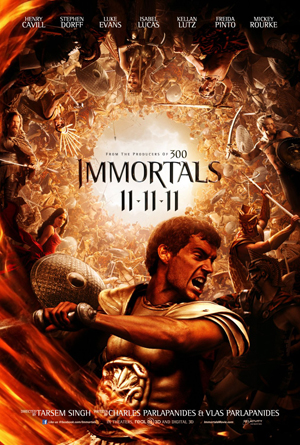 Everyone seemed to be wondering lately whether or not the new “Immortals” movie by “300” director Mark Canton was going to be the same bone-crunching, muscle boasting, action ride “300” was in 2006. Speculation has also been raised on whether its unique release date of 11-11-11 was going to have any significance, or if it just simply looked cool.

After watching “Immortals,” I can say that there are more similarities than differences between the two films. Both are based on Greek mythological lore and contain prophetic narration, oracles, sex, graphic fantastical violence and hard, chiseled bodies. If you’re looking for excitement, and enjoyed the cinematography and epic fight scenes of “300,” then you won’t be disappointed with “Immortals,” though there aren’t as many iconic quotes from Spartan King Leonidas, such as “This is Sparta!”??

Although the plot in “Immortals” is different and appealing because of its inclusion of Gods, Titans and fantastical reality, there is little character development and a fragile storyline.

But shouldn’t we expect that from a movie that is primarily meant to be a 3-D visual feast like “300?” The majority of the time I found myself anticipating the next slow-motion action sequence.

The plot has its roots in Ancient Greek myth regarding Titanomachy, the wars between the Greek Gods and the Titans, and the legends of Theseus and the Minotaur. In the film, humans and Gods are pitted against one another in some sort of ethereal arena.

The film’s protagonist, Theseus (played by Henry Cavill), is sent on a quest to destroy King Hyperion (Mickey Rourke) and his army of miscreants before Hyperion obtains the powerful Epirus Bow, a godlike weapon forged by the God of War, Ares. He ultimately uses it to free the Titans from Mount Tartarus.
??
Zeus (Luke Evans) chose Theseus to save the Gods because of his heart-warming background; he’s a peasant boy with no father, who witnessed the slaughtering of his mother, and just so happens to be trained in the art of war. (Did I mention he’s ripped just like King Leonidas?) The Gods of Mount Olympus are lawfully forbidden to intervene in war between Hyperion and humankind, thus Theseus plays the role of a god on Earth by sacrificing his life for the greater good of Greece.

The primary strength of “Immortals” is its cinematography and battle sequences. Like “300,” scenes are animated to display the ravenous terrain of ancient Greece, in particular a view from atop Mount Olympus, where all of Greece can be seen with the naked eye.

Back in 2006, I played hooky from high school to watch “300” because I knew I was going to be blown away by the spectacular battle sequences.

I went to see “Immortals” for the very same reason, seeing what other ways battle could be portrayed on screen. I was not disappointed. The fantastical sequence at the conclusion of the movie, where the Gods battled the Titans, showed some genius, as weapons were swung, bodies flew through the air and blood splattered with great detail, all in gratuitous stop-motion-slow-motion camera.

Naturally, you save the best for last. With “Immortals” I certainly got what I expected in visual content, but I’ll still side with “300” as the more exciting of the two.