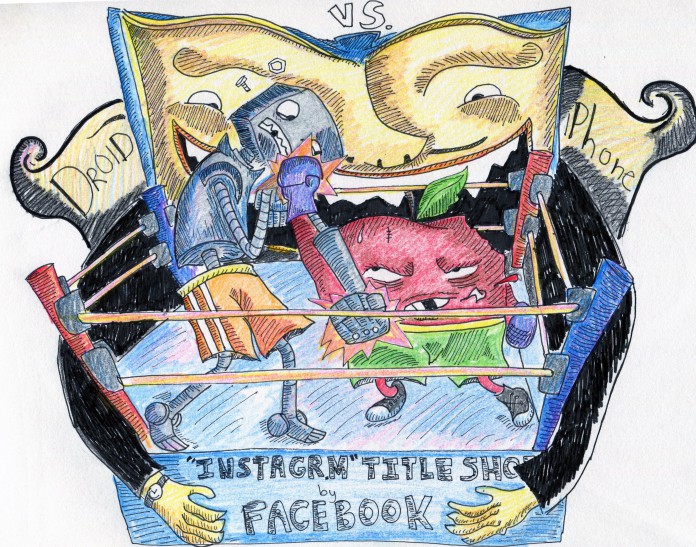 Just last week, Facebook cashed out some big bucks for the purchase of the increasingly popular cell-phone app, Instagram. But what exactly is the big deal? Why is the Internet suddenly laden with hostile status updates and elitist tweets scrutinizing Mark Zuckerburg, Facebook’s CEO and founder, and his decision to assimilate Instagram into his social networking empire? His company, now valued at over $100 billion itself shelled out a whopping $1 billion for the acquisition of the app.

Many people have been asking themselves just what would lead the company to give one whole percent of its net worth to the super-cool-indie-hipster-makes-you-look-like-you’re-a-pro-photographer-when-you’re-really-not-photo-sharing app. Well, quite frankly its reason certainly wasn’t reason enough.

“It was not just a photo-sharing app. It was a way that people were communicating with each other the same way they might have on Facebook,” said Paul Kedrosky, a senior fellow at the Kauffman Foundation, in a Los Angeles Times interview. “Facebook saw it as a fast-growing competitor.”

Essentially, what Facebook saw was a quick-rising social networking platform that might give the company a run for its money. While the app has increased in popularity at an incredible rate, let’s think practically for just a minute here. How plausible is it that a free mobile app strictly designed to allow its users to share photos with their friends could exponentially develop into something so much more than what Facebook has become today? The odds are less than one in a million but apparently, Facebook along with a few top entrepreneurs beg to differ hence the billion-dollar purchase.

Well Facebook, congratulations. You’ve successfully stopped Instagram before it takes off and conquers the world one social network at a time, beginning with the number one social networking site in the world- yours. Now what is the company to do with the app? Completely redesign the user interface every 30 days? Because if we take a peek into history, the only thing this has accomplished is keeping Facebook users of the past extremely dissatisfied. Zuckerburg himself made a pitiful attempt to clear up any “confusion” the general public might have had saying, “We need to be mindful about keeping and building on Instagram’s strengths and features rather than just trying to integrate everything into Facebook.”

If we look past the obvious irrationality of the whole scenario, it’s nothing more than an outlandish business deal with no real effect on users of Facebook or Instagram. So why the hype? We saw the same sort of thing just weeks ago when the app was released to the Android Market: millions of iPhone users clutching dearly to their phones, hacking away with their thumbs, expressing their outrage at a new addition to their elite group. Many of them, simply sucked into the cyber proclamation of superiority, expressed their disappointment with both Android and Instagram, and now Facebook without any sort of validity.

I myself use an iPhone and though I believe the iPhone serves as a better phone than any phone Android has put out there, I honestly could care less that my friends with Android phones can now use Instagram as well. Good for them. And as for Facebook, I can’t seem to understand the logic behind the company’s actions but as far as I’m concerned, that $1billion didn’t come out of my pocket so I haven’t really got much to worry about except annoying and unnecessary changes to Instagram’s interface that we can expect to see soon. Who knows? Maybe this puts us one step closer to a world in which Apple, Google and Facebook can all be friends.