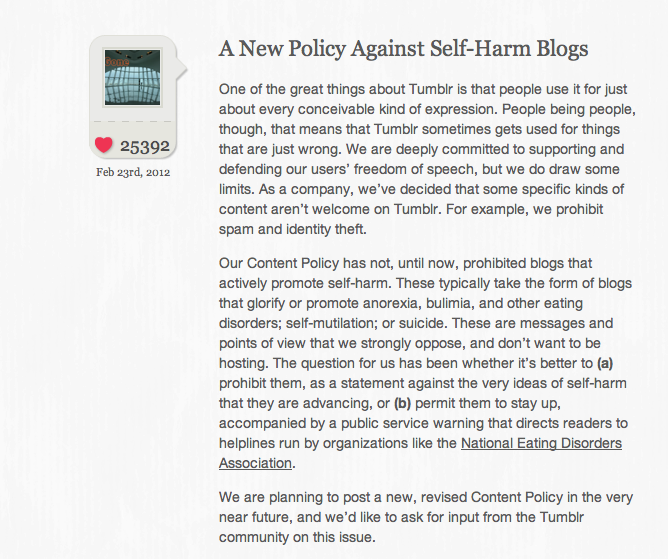 Anorexia. Bulimia. Cutting. Suicide. Do you support these? Would you like to see these kinds of things pop up on your dashboard? I wouldn’t. The blog site Tumblr recently announced the censorship of blogs that promote-self harm. This is a good-natured gesture by the Tumblr staff, so why are they being chastised for it?

According to those die-hard Americans who believe in free-speech and the right to express themselves, Tumblr’s new policies are a draconian maneuver to wield power and decide in American society what’s right and wrong. I don’t think so. Here’s why.

If you want to get technical with the Declaration of Independence, here’s something for you to think about. One of the first things that is said in the Declaration of Independence of the United States is that every person is entitled to the right to “life, liberty, and the pursuit of happiness.” So promoting suicide or self-mutilation not only denies people the right and opportunity to be happy, it takes away their condition of living. You think the people posting pictures of their cut up thighs or thirty-calorie diets are happy? If you’re a masochist or just plain stubborn, have it your way. But in no way does self-harm ensure the well-being and health of an individual- or the people following them on Tumblr.

Another point: don’t get your panties in a fix about an independent company creating their own policies because they believe it to part of their standards. Tumblr gets to choose what is and isn’t okay, after all, it’s their website. And not to mention you aren’t paying a dime to use it. This isn’t the government trying to take control of Tumblr- if it were part of SOPA, that’s a different story. Tumblr is not the only blog website out there; if you don’t like it, leave. If you think Tumblr is the only website doing this, you’re wrong. On Facebook, you can flag a post or picture that you might think is offensive or inappropriate.

I personally use Tumblr, and I’ve seen things I wish I didn’t see. To be honest, I’ve actually chosen to follow a few individuals who talk about suicide on the daily, post pictures of their oozing-blood thighs and even girls who tell you about how long they ran on the treadmill so that they pass out. So don’t tell me that these people are being healthy, when we, as human beings, are inherently programmed to protect ourselves from any kind of harm.
Set aside censorship for a minute. Yes, we might be bound by what we think is socially and culturally acceptable in our society. And to be frank, self-harm is not. But what I think is even more essential to keep in mind and admit to yourself, that there exists a higher standard of what human beings naturally deserve. Ingrained in all of us is the undeniable truth that as humans we know what is right and wrong; what is moral and unmoral; what is hurtful to the soul, to the body. And through language and our ability to reason we realize that. And when we realize that, we naturally want to prevent, avoid, and better the lives of those who have and are dealing with such things. This is bigger than censorship: it’s about our lives.

No One Left in the Middle: The Trouble with Bernie Sanders