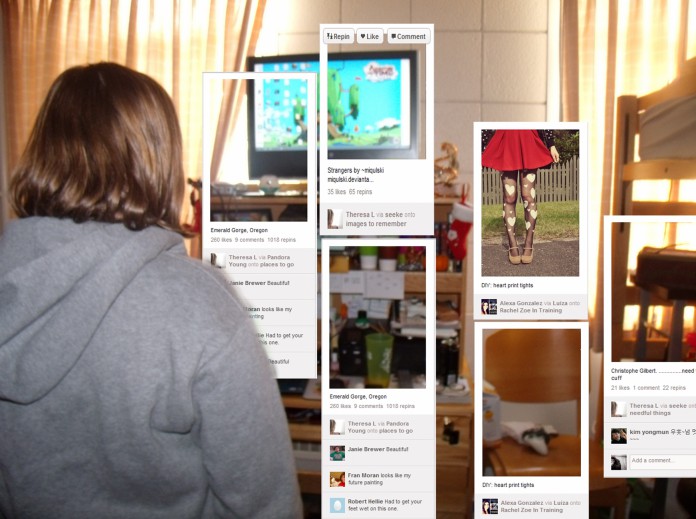 Pinterest is an up-and-coming social networking site where users “Pin” their interests to themed “Boards” in the form of images, like a virtual bulletin board. The images link to their source websites, and users can “Repin” or “Like” other pins on public boards, and also comment on various pins. Popular interests include photography, fashion, food, arts and crafts and motivational images.

Launched in March 2010, the site’s user base grew tremendously in 2011, when its addictive interface proved especially popular among women. At this point, users must request an invitation before they can set up an account, which gives the site a sort of “elite club” appeal.

Users who frequent sites like Tastespotting or who follow blogs might find Pinterest useful for keeping track of various pages that otherwise get lost in bookmark folders. Pinterest is an especially great way to keep track of previously bookmarked recipes, because it’s possible to identify the recipe through a picture rather than the bookmark name.

Some boards have organizational purposes such as wish lists, wedding planning, redecorating a house, keeping track of research, putting together a new wardrobe or planning a vacation. Other boards might just be collections of pictures that the user likes, maybe of architecture or fashion.

Minna Kim, who graduated from UCSB in 2011 with a bachelor’s degree in costume design, enjoys the visual experience Pinterest provides.

“Since I can’t afford to buy all the nice clothes I want, Pinterest is a fun way to window-shop and save the links for later,” said Kim. “It’s also great for recipes.”

Pinterest’s appeal is that it allows users to organize their interests in ways that other sharing sites, like Tumblr, lack. Rather than various interests being mashed together on one blog, users can organize their interests on boards separated by category. The pinboard-style interface also makes it more exciting to browse interest categories compared to the tired reverse chronology of Twitter and Facebook.

While Pinterest requires a description when pinning an image, it is possible to get around that requirement by typing a space. One neat feature with the description is that after entering a price for a product, Pinterest automatically labels the image with a little price banner. This has a useful application on wish list boards.

In terms of business applications, businesses interested in social media should be aware that Pinterest is not all about self-promotion. Sharing and repin interesting images from other users and websites is the site’s lifeblood, and a company that only pins its own products will come across as stale and gimmicky.

“If you simply display images of your products without contributing other content or sharing other users’ pins, you’ll likely find that people don’t pay much attention.” Falls writes. “After all, no one likes a self-absorbed blowhard.”

For those interested in Pinterest’s bulletin board Web design, the jQuery Masonry layout plugin by designer David DeSandro is available for download at masonry.desandro.com. The “masonry” interface definitely seems to be the next step in social media organization, at a time when reverse chronology is boring and unintended visual gaps are unseemly.

“The result minimizes vertical gaps between elements of varying height, just like a mason fitting stones in a wall,” DeSandro’s website describes.

In terms of culture, Pinterest tends to have an optimistic atmosphere, and it definitely lacks the social justice attitudes that Tumblr users promote. This is likely a result of the demographic and Pinterest’s focus on images. Personally, I’m going to keep Tumblr for sharing text and Pinterest for sharing images.

For Internet-goers who prefer more discussion and a little less girliness, Reddit might be the place to go. For those who need a strong dose of social justice, Tumblr should be right for you. But if you can’t wait to get your bookmarks into organized, visible boards while also being bombarded with artsy photos, head to www.pinterest.com and request an invite.

Space Launch System Speeds Off to A Start