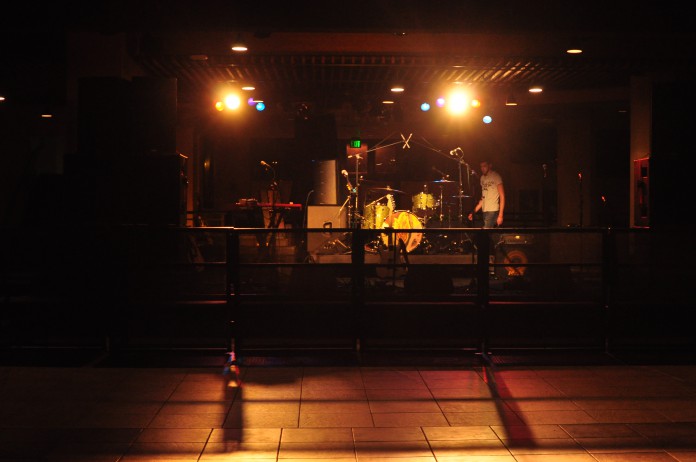 Battle of the Bands, which took place in the Hub on March 1, was predicted by many to be a battle between bands with extraordinarily similar musical styles. Overall, this prediction turned out to be correct; four out of the five student bands featured were funk-based, and the fifth band’s sound was closer to a grungy-sounding rock. There were, however, some pretty big differences between the styles of funk that the crowd found pleasing. After all of the performances were over, the judges only took about five to 10 minutes to decide that the crowd favorite, The Fire Department, had won the contest.

The first group to perform was the Givers & Takers, who had a very earthy feel to their mix of reggae and funk. I could tell that the performers were definitely feeling the music, but their connection with the audience was slightly lacking, compared to the next performers.

Second on stage was The Bad Love, who had a mixed sound of reggae, funk, blues and house. Their performance and sound definitely made them different, featuring solos from every instrument. The variety of synth sounds the band’s pianist employed during the entire set gave The Bad Love’s music a different vibe, and the crowd was definitely feeling it.

Next up was the Fire Department, with their 11 band members. They cite their influences as P-Funk, Parliament and one of my favorites, Stevie Wonder. Their unique style of dress was certainly eye catching, and reminded me a bit of Alice in Wonderland, with a Mad Hatter for a pianist, an Alice in center stage and the other characters thrown here and there accordingly across the stage. Their upbeat mix of funk, reggae, Jazz and hip-hop was easy to dance to, and the enthusiastic members got the crowd moving and singing along to their tunes.

Fourth was The Ole’s, with another breed of funk that was reggae-based, doused with a mixture of hip-hop and blues. The four-member band, which formed this year, cites their musical influences as Sublime (which is a dead giveaway for their style of music), The Police and the Roots. What set these guys apart from the other bands was their snippets of jokes in song and between songs that were hilarious and completely applicable to students living in Isla Vista. “Sabado,” their first song, glorified the street in IV that they consider pretty “bomb” in comparison to the generally freshman-packed Del Playa.

Last but not least, Ellison Hall took the stage. Different is the main word that comes to mind when I think of their set. They set themselves apart from the rest of the bands with their grungy rock sound. According to the band’s members, who are a mix of University of California Santa Barbara and University of California Los Angeles students, the best way to describe their music is “Queens of the Stone Age meets the Yeah Yeah Yeahs meets Bach.” The band’s biggest influences besides those artists are Deadweather and Modest Mouse. While different can sometimes be good, I personally had a hard time appreciating the music. I’ll give them props for the fact that Battle of the Bands was their second show ever.

During an interview before the show, almost all of the bands agreed that the goals behind their music are to send a message to anyone willing to listen, to save the planet and to remember the freedoms that we deserve as people. Ellison Hall, somewhat of a more rebellious group, was more focused on spreading a message speaking out against oppressive authority.

The Battle of the Band’s excited winners, The Fire Department, have been together for about a year. Though all of the band’s members seem to bring talents to the table, the band’s singer, Meg, was described as having “fiery pipes” by her other band members. They say she brings a good presence, as well as a better smell, to the stage as well. Dusty, the group’s MC, is another main focal point on stage. Man, oh man, does this boy have skill! Watch out for these guys at Extravaganza, as they open the event in front of thousands of eager UCSB students.

“Nailed It!”: Distract Yourself From Our Crazy World With Awful Baking