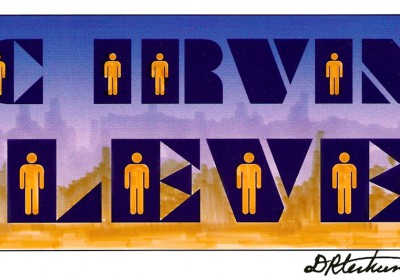 Oren’s position of power, his prior involvement as a paratrooper with the Israel Defense Forces in 1982 that resulted in the mass murder of Lebanese and his previous involvement as the spokesman for the IDF during the Gaza massacre made him a controversial figure to Palestinian sympathizers.
During Oren’s speech, members of the Irvine 11 individually interrupted, voicing their distaste for the ambassador claiming he was guilty of great injustices and promoted genocide. As the protest was peaceful, each student said their piece, walked to the aisle and allowed police to escort them from the building. The method of protest received strong negative criticisms from the University and the judicial court.

“Michael Oren is a trained propagandist,” said Taher in defense to the protest. “Michael Oren was directly involved in the Gaza Massacre… For me a protest is standing up, getting in somebody’s face and telling it how it is.”
Zionist groups convinced Mark Yudof, president of the University of California system, to pressure the chancellors of UCR and UCI to suspend Muslim Student Unions at their universities for a year. The District Attorney charged the Irvine 11 with disruption of a public event and conspiracy to disrupt a public event, which resulted in community service and a fine.
“People don’t want you to talk about what really happens in Israel. They will try their best to shut you down. You have to fight back as hard as possible,” said Yudof.

In 2009 the Israel Lobby targeted professors of California universities who spoke out against Israeli crimes. Robinson was a target for denouncing the Israeli massacre in Gaza in late 2008 and early 2009, and nearly ran off campus for being an activist against the injustices in Israel. Robinson gave a brief explanation of the development of the Israeli economy and its shift from a traditional agricultural economy to a technology based economy with special interests in counter-terrorist products and military goods.

Dr. Robinson voiced his views against recent acts taken by Israel officials that promote ethnic cleansing and social inequalities aimed at the Palestinians. Dr. Robinson described a picture of Israeli colonialism, the early warning indicators of possible future genocide to come, and the similarities between recent Israel actions that promote social inequalities to the early actions of the German Nazi Party. He further explained that the mission to gain legitimacy for Israel’s recent policies is failing and in response a “farce New Anti-Semitism” is forming. While “old Anti-Semitism” still exists and people still harbor hateful prejudices against the Jewish culture, “New Anti-Semitism” is a tactic used by officials against critics of Israeli policies.

“If you criticize Israeli policies you are an Anti-Semitic,” said Dr. Robinson.
The general consensus of the panel discussion is that the fear of being labeled an Anti-Semitist and the fear of opposing western ideology is ultimately taking away a person’s freedom to protest, thus taking away a person’s freedom to speak out for what they feel is morally right. Still students like the Irvine 11 will continue to speak out if they truly believe in the cause.

“My people are being killed, my people are being oppressed, I’m going to do everything I can do to stop this,” said Herzallah. “I’m not going to follow a form of protest that fits the status quo that allows my people to be oppressed.”
Taher Herzallah and the rest of the Irvine 11 continue to fight as they challenge their conviction through the appeal process.