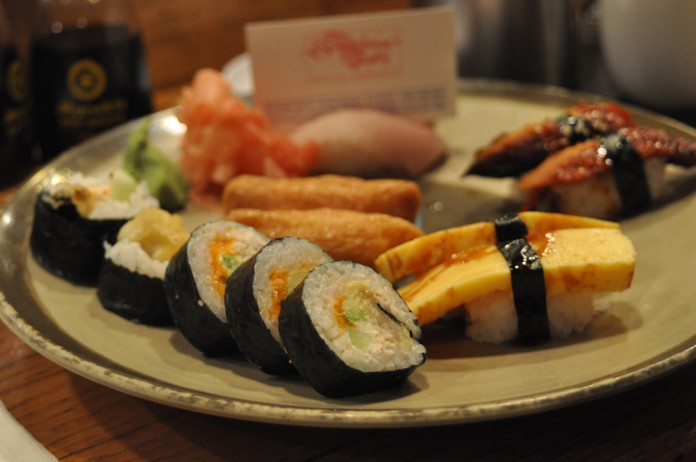 With the lack of decent, affordable sushi in Isla Vista, sushi-lovers might find themselves sadly abandoning their cravings. Those looking to avoid pricier restaurants in Santa Barbara that are more suitable for date night can appreciate a mid-week study break without being forced to spend too much. For those who crave sushi, half-price sushi at Something’s Fishy Steakhouse & Sushi might be the solution you’re looking for.

Something’s Fishy Japanese Steakhouse & Sushi Bar boasts all-day “happy hour” half-price sushi deals from Sunday to Thursday every week. Nothing on the sushi menu is over $4 during happy hour. Located downtown on the corner of State Street and Cota Street, the eatery is just a few minutes walk from the Transit Center, making it easy for UCSB students to arrive by bus.

I’ve eaten at Something’s Fishy a few times before, both at the sushi bar and at their hibachi-style grill tables. Thursdays seem to be a pretty busy night for the sushi bar. Luckily, it was only a five-minute wait for me and my companion to be seated last week.

There were a few couples eating sushi at the mostly-empty hibachi tables, but as we were there for the real sushi bar experience, I ordered unagi ($3.25), egg cake ($2.25), yellowtail ($3.25), inari ($1.25) and the Catalina roll ($3.25). My companion ordered a vegetable roll ($3.00), a California roll ($3.25), a cucumber roll ($2.50) and a cooked salmon roll ($3.25). Clearly she isn’t much of an adventurous raw-fish eater like I am, but we were able to rate from the perspective of both types of sushi restaurant goers, such as those who constantly demand fish, and those who politely decline imposing strips of raw fish in lieu of more harmless cooked rolls or vegetable-based sushi.

Unagi, my favorite sushi, is typically grilled to a delicate fleshiness and served with a dark, sweet kabayaki sauce drizzled over it. Something’s Fishy’s unagi was a little overcooked, which disappointed me. The fish was a bit tough and crispy instead of my desired unagi consistency: smooth and seductive.

The Catalina roll, which contains crab, egg, tempura mackerel and a spicy sauce, was decent. However, the yellowtail, egg cake and inari were unexciting. I ordered the egg and inari because they were cheap, but in the end it turned out to be a waste because they didn’t satisfy my sushi fix. So despite my stomach’s protests, I ordered more: the tuna roll ($3.00), the crab roll ($3.25) and the Philadelphia roll ($3.75).

The tuna impressed me. I think it was much better quality than what I’m used to eating, and so the rich fattiness of the fish caught me off-guard.

I don’t have much past experience with crab or Philadelphia rolls, but neither roll left an impression on me, however, so I probably won’t be ordering them anywhere else in the future.

My companion did enjoy the California roll over other ones she had tried, probably because Something’s Fishy uses real crab rather than imitation. The cooked salmon roll, however, was unremarkable.

One thing I’ve noticed during the few times I have eaten at Something’s Fishy is that it takes a few minutes too long to receive our check after we ask for it. If the restaurant’s busy, don’t expect to be able to leave exactly when you would like.

While the quality is far from the best sushi I’ve ever had, I recommend Something’s Fishy for the college crowd, who can appreciate the low prices for the more exciting rolls. Unlike many cheap sushi joints, Something’s Fishy has chefs that really know how to roll, which helps customers avoid the all-too-common mess that typically accompanies cheaply made sushi. Bring your friends for a fun weekday night, or go during lunch for a less crowded sushi experience.