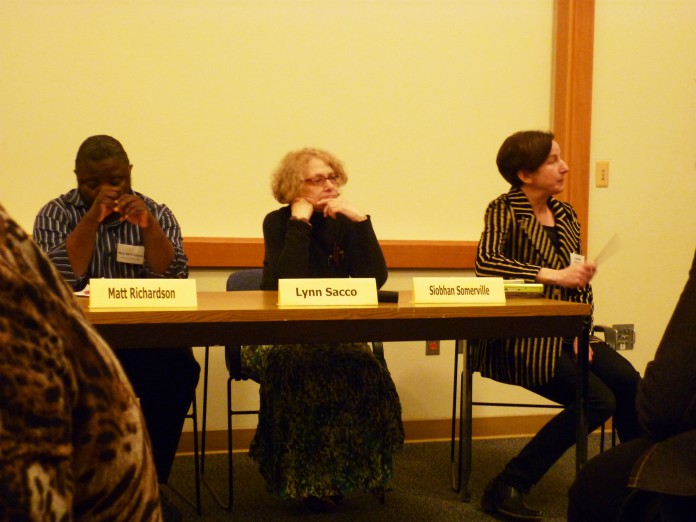 In less than a generation, University of California Santa Barbara’s Feminist Studies Department has grown into a powerful and respected academic community. According to the department website, the feminist studies department holds several undergraduate and graduate classes each quarter covering many interdisciplinary topics with the 11 core faculty members and 45 affiliated faculty members.

Celebrating the 20th anniversary of its Pre-Doctoral Dissertation program this year, the feminist studies department held its annual conference titled “The Past, Present, and Future of Feminist Studies” Thursday, Feb. 9 to Saturday, Feb. 11. The department invited UCSB feminist studies, women’s studies and gender studies alumni from all over the country to return to lecture at their alma mater.

Over 50 people attended the opening remarks and first panel “Genders and Sexualities” Thursday night in the McCune Conference Room. Feminist Studies Chair and Hull Professor Eileen Boris lead the opening remarks along with Professor of History Patricia Cline Cohen. Professor Boris discussed current themes in feminist studies including an expanded identity among race, gender and social labels as well as the idea that meanings of words and labels shift depending on “where we stand”, and the importance of perspective. Professor Cohen detailed her own experiences as a scholar and professor in women’s studies and feminist studies during the second wave of women’s studies programs.

Both professors were excited to congratulate the feminist studies scholars in attendance, including 10 to 15 Pre-Doctoral Dissertation scholars, five to six Ph.D. scholars and three to four doctoral emphasis students. After a round of congratulations, UCSB Feminist Studies Professor Leila Rupp introduced the panelists for the scheduled “Genders and Sexualities” panel.

Matt Richardson, from the University of Texas in Austin, discussed the research on understanding the lives of queer people of color, and the connection between the queer community and people of color. Richardson said that “black is inherently queer” and emphasized how each community is alienated and dehumanized in different but also similar ways.

University of Tennessee, Knoxville Professor Lynn Sacco discussed research on the sexualization of young girls in early 20th century cinema, such as Shirley Temple, and a potential relationship with a normalization of incest among respectable white families. Sacco emphasized her interest in looking at the history and non-normative characteristics of white cisgendered males as a way to remove this category as the default.

University of Illinois, Urbana-Champaign Professor Siobhan Somerville spoke of her research in the National Archives about birthright citizenship and how U.S. Congress Bill H.R.140 “Birthright Citizenship Act of 2011” tethers a child’s birthright to the citizenship of the parents. When asked about her experiences with archival research, Professor Somerville emphasized that browsing such vast information is not enough, and the researcher “need[s] to know exactly what [they’re] looking for.”

On Friday there were graduate student-only workshops where graduate students were paired up with former ABD scholars to discuss their research on related topics. Open to the public were more panelists speaking on topics “The Past, Present, and Future of Feminist Studies” and “Productive and Reproductive Labors.” Finally, Saturday held two more panelist discussions, “Race and Nation” and “Rethinking the Field,” with a final concluding discussion to end the conference.

After the event Thursday night, Professor Sacco reemphasized the relevance of these topics while discussing a new trend among young women who “hate other girls”, or to a lesser extreme, “are only friends with guys.” Such potentially misogynistic utterances may sound familiar to students at UCSB, and they demonstrate how important the Feminist Movement is to these scholars, and that now is not the time for students to disregard current gender issues.