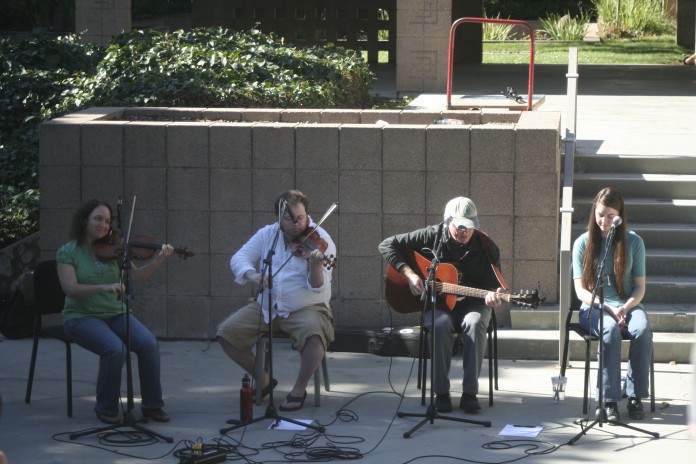 As part of an effort to promote music from other cultures, the MultiCultural Center and the ethnomusicology branch of the music department here at University of California Santa Barbara are collaborating to set up free weekly concerts, taking place on Wednesdays at noon in the Music Bowl. The group performing this past week, The Rolling Wave, specializes in traditional Irish music and dance. Members include Jason Busniewski and Lillie Gordon on violin, Andy Doerr on guitar and Alice Ryan as the dancer and main vocalist in the group. The group formed mainly through “playing in social situations,” according to Gordon, and has been together ever since.

The first part of the concert consisted mainly of catchy, uplifting melodies that are clearly meant for dancing. Ryan performed a “Sean Nós” dance (Gaelic for “old style”) in many of the numbers. As a whole, the dance component of the performance was incredibly effective. It created a great visual aspect, even inspiring audience members to follow her example- in particular, two UCSB students added their own take on the music by doing the robot.
The second portion of the concert included some slower ballads, as well as more of the spirited jigs and polkas from earlier on in the program. One of these songs crossed over into Scottish music and was dedicated to poet Robert “Rabbie” Burns, whose birthday was that day. Doerr, who sung this ballad, has always had an affinity for this genre of song.

In between pieces, Busniewski elaborated on the structure of the Irish song genre.

“Although in general, Irish music is not as ‘free-form’ as other styles like blue-grass, musicians find ways to make it their own,” said Busniewski. “For example, it’s common to add smaller, subtler ornamentations within the piece.”

“Ballads drew me to the music,” said Doerr.
Busniewski and Gordon, the two violinists in the group, are both graduate students in the music department. Busniewski says he got involved in this style of music during high school, and has been playing ever since. His work at UCSB is actually on Irish music as well.

“My master’s thesis is on the Irish music scene in Milwaukee, and how different musicians in the Milwaukee area are adopting very regional styles of playing in Ireland,” said Busniewski.

Gordon also said that she specializes in Scottish music as well as Irish music.

Jessica Newman, a fourth-year computer science major who attended the concert, said, “I love world music, but in particular I’m a huge fan of Irish and Scottish music.”

Newman was clearly not the only one who liked the group–the concert drew a large crowd, and by the middle of the concert, audience members were enthusiastically dancing and clapping along. This was a little surprising to me, as college students are not typically very aware of music from different countries. However, perhaps both The Rolling Wave’s performance, added to the entire world music series as a whole, will hopefully help to further popularize this enjoyable genre.