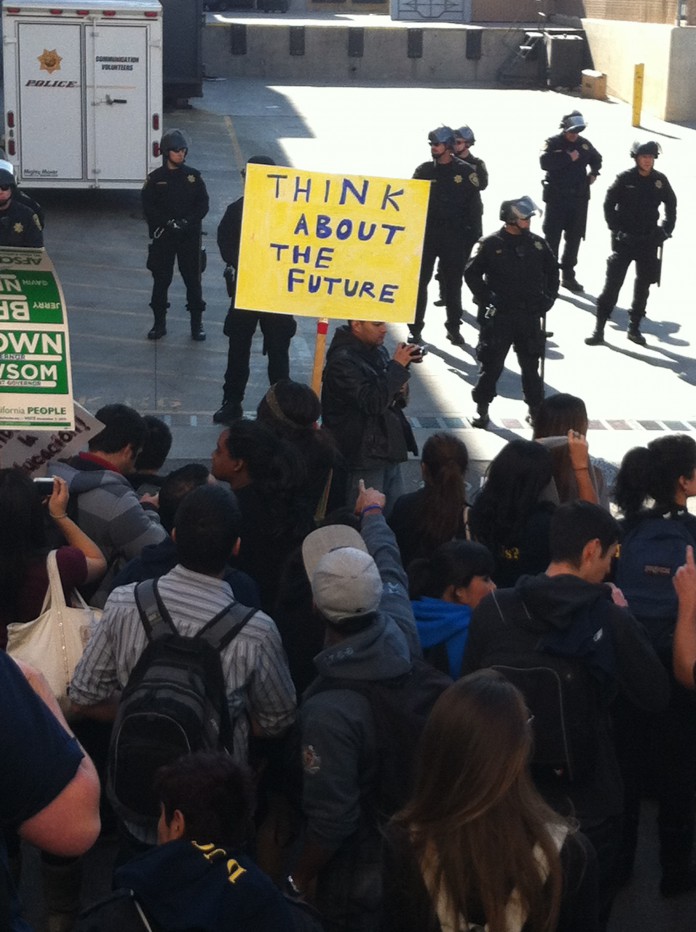 Frustrated over rising tuition costs and dissatisfied with the regents’ policy of allotting one minute of time per speaker during public forum, protesters gathered around the entrances to the Highlander Union Building where the meeting was taking place.

“I’m here to protest against the tuition increase,” said Aysun Far, a student at the protest. “They said they’re going to increase it 18 percent. How would they feel if we cut 18 percent of their paycheck? We can’t afford the things we used to.”

Many of the protesters, most of which were from Riverside and nearby UC campuses, attempted to enter the meeting but were stopped by UC Police equipped with batons and riot gear. Police spoke to the group of protesters, as many as 500 people, over a loud speaker and urged them to disperse. Two arrests were made, according to reports.

“I was listening to the regents meeting yesterday and there was a lot of public comments from students and they only had a minute to speak so it was really quick and back to back,” Park said. “I don’t know how much information they could withdraw from that. I want them to actually listen to students and give them time.”

Park passed out t-shirts to the protesters and said he wanted to inform students about the UC’s current budgeting issues.

“We want to empower the students along with educating them but a lot of students don’t know what’s happening and why,” Park said. “We want them to look in unison.”

Park added that he wanted to see more student representation on the board of regents and hoped that the regents would look for alternative sources of funding other than raising tuition.

Increasing tuition was not included in the regents’ agenda, but many of the students expressed dissatisfaction with the regents’ past decisions to raise tuition and the financial burden this has placed on them.

“I always wanted to be a part of a protest and this is something I can stand up for,” said Jessica Hernandez, a computer engineering major from University of California Irvine. “This is something that’s going to affect for me for quite a number of years, having to pay back all the loans and everything. I would hope they could at least acknowledge us, we’re here.”

Many of the protesters said they wanted to enter the building not to disrupt the meeting, but to hold a direct conversation with the UC regents.

“There are plenty of people willing to sit down and converse with a non-violent mentality,” said UCR psychology major Chelsea Grenfeld. “We asked a couple of police to go talk to their boss so we could organize some kind of dialogue with the regents. We want the regents, not the police.”

One protester, who went by the name Orlando, brought his two daughters and his wife to the Riverside demonstrations.

“Essentially, I’ve got eight years to plan for college, and the way that things are going, paying for college is going to be like buying a house,” he said. “It makes it very difficult for those on the lower end of the financial system to really advance. It creates a larger gap in education and in finance. If people can’t get educated, they can’t get better jobs.”

“If anything, we’re protesting in the advance,” Orlando said, looking towards his two young daughters.