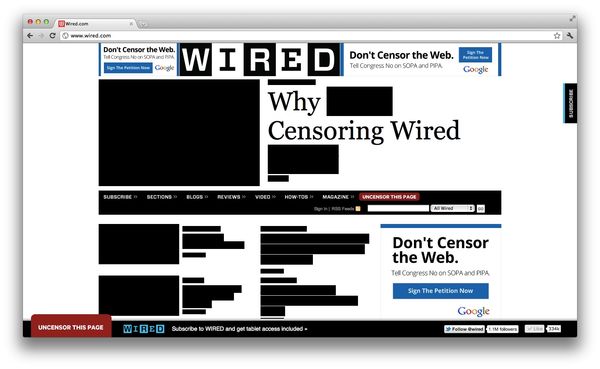 Thousands of sites, including Wikipedia, Google, Reddit and Craigslist, joined the virtual protest against PIPA as well as the Stop Online Piracy Act last Wednesday, encouraging some members of Congress to abandon their support of the bills.

Over 162 million people saw Wikipedia’s black layover on its English edition, informing users about the legislation. Google simply blacked out its logo and linked to a page with information and a petition against the bills. Other sites, such as Reddit, Craigslist, BoingBoing, Wired, Mozilla and thousands of others protested in similar ways.

In addition to these well-known sites, thousands of individual users participated. According to BlackoutSOPA.com, over 70,000 people added their anti-SOPA/PIPA badges to their Twitter, Facebook and Google+ avatars and profile pictures. While Twitter itself did not blackout, users made 2.4 million tweets relating to SOPA. Tumblr gave its users the option to blackout their blogs for the day.

Facebook CEO Mark Zuckerberg made a wall post against SOPA and PIPA, writing, “We can’t let poorly thought out laws get in the way of the internet’s development.” The message received over 490,000 “likes” since it was posted.

Both SOPA and PIPA intend to protect the intellectual property rights. It intends to target foreign “rogue” sites, which sell counterfeit goods, by giving the Justice Department authority to halt payment services and block DNS (domain name service) to sites if they do not remove offending content within five days. This means that if you were to type in the URL of a blocked site, browsers would be made to act as if it weren’t there. PIPA also includes provisions to allow domain name seizure in some circumstances.

The virtual strike was meant to raise concerns about these measures. Protesters argue that such bills would be ineffective in stopping piracy and would instead harm freedom of speech and stifle innovation on the Internet. Technological experts have also stated that these provisions could be subverted and that it would threaten the structure and security of the Internet.

In the midst of the blackout, 18 senators dropped their support of PIPA, including seven previous co-sponsors. Two Congress people, Rep. Benjamin Quayle (R-AR) and Lee Terry (R-NV) have dropped their support of SOPA. This adds to the growing opposition to SOPA and PIPA, which includes President Obama and House Majority Leader Eric Cantor (R-VA). They have stated earlier that they would not support SOPA in their current forms.

On the same day of the blackout, a different bill known as the Online Protection and Enforcement of Digital Trade Act was introduced into the House, and it’s counterpart, the OPEN Act, was introduced into the Senate by SOPA and PIPA critics. These bills would place the regulatory power in the hands of the International Trade Commission. It would contain an appeals process for charges held against the accused, and would only apply to sites that “willfully” commit copyright infringement.