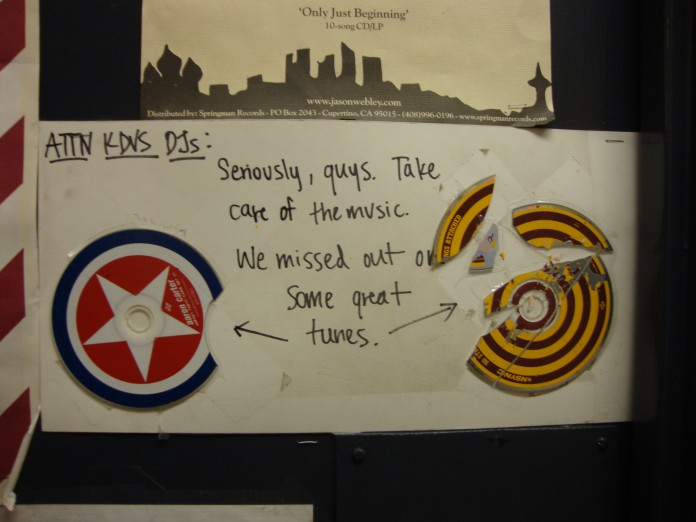 The University of California radio stations and other California college stations came together on Nov. 19 for the biannual UC Radio Network conference. KDVS, University California Davis’ radio station, hosted the event, which featured activities throughout the day that ranged from station collaboration workshops to the unexpected press conference held by UCD Chancellor Linda Katehi.

The conference originally began as an outlet for UC radio stations to meet and exchange ideas, but has since grown to include more California college stations and diverse topics.

“UCRN started as UC radio stations,” said Neil Ruud, a fourth-year political science major at UCD and KDVS’s general manager. “It is more of a student community, not limited to the UC’s.”

Among building relationships with other stations, most of the attendees sought ways to better their jobs at their respective radio stations by listening to how other stations functioned.

“I want to compare and contrast how different radio stations work across campuses,” said Navid Ebrahimzadeh, a third-year College of Creative Studies literature major at University California Santa Barbara and KCSB’s KJUC manager. “I’m hoping to hear different outreach and publicity tactics I can use for KCSB.”

While all of the workshops were appealing, attendees had to pick and chose as a result of the overlapping schedule. A workshop about how to build a record label was lead by KDVS and the panel included the founders of Rys Que, Crossbill and MaltDuck Records, along with the KDVS’s label directors. Most of the independent label owners on the panel had their start at KDVS before crafting their labels. They stressed how independent labels are on the rise with the decline and consolidation of major companies. The group also detailed the importance of forming good relationships with bands working on their burgeoning labels to promote and market their music.

While Crossbill, MaltDuck, and Rys Que generate revenue as businesses, KDVS is a non-profit label that gives small bands exposure.

“It’s all about helping promote bands that are local,” said Roy Werner, a third-year technocultural studies major at UCD and one of KDVS Recordings’ label directors. “It’s cool to help these unheard artists out.”

Another workshop was about building a DIY community, a way in which stations can promote live music at neighborhood venues. Each station spoke about what has been effective when working with the DIY music scene such as inclusive, all ages shows and being on good terms with neighbors around show houses.

“I thought it was really nice getting input on this situation from other schools,” said Allison Ruffner, a first-year media studies major at University of San Francisco and a KUSF volunteer DJ. “It was beneficial to hear what’s worked effectively at other stations when they put on local shows.”

Another workshop concerned maximizing multimedia to promote a station and its radio programs. The stations mentioned different ways to promote their organization such as blogs or quarterly magazines, like KDVS’s KDViationS. University of California San Diego’s KSDT radio station is currently online only, but one of its student representatives spoke about making the most of that web status. “I want to expand our Internet presence,” said Eli Pechman, a fourth-year electrical engineering major at UCSD and KSDT’s sound engineer. “Radio is limited in scope with sound. Video streaming is an up and coming thing I want to use at KSDT.”

One last workshop was how to develop an on-air personality, which featured a very lively panel of people who mentioned the dynamics of co-hosting a show.  They shared tactics to spice up hosts’ shows such as voice altering through Vocoder or how to come up with an attention grabbing theme.

Although a workshop on occupying the airwaves was meant to take place, UCD Chancellor Linda Katehi held a press conference, which drew student protesters and remaining college radio station attendees.

“We need to work together to make our listeners more aware of what’s going on in the media, the state of California, and the UC system as well,” said Eric Wolff, a fourth-year sociology student at UCSB and KCSB’s general manager.

In the spirit of DIY shows, KDVS ended the conference with live music from Kevin Greenspon, Former Selves, Dad City (which featured Werner on guitar) and Sean Johannessen at a station member’s apartment. Tapes were looped, stunning visuals were shown, ambient music soothed the crowd, and a saxophone accompanied a band set with the different acts that played, giving stations time to socialize before heading back to their home campuses.

“The conference was very productive, really exciting, and a great time,” Wolff said. “I’m really looking forward to more collaboration among the stations.”