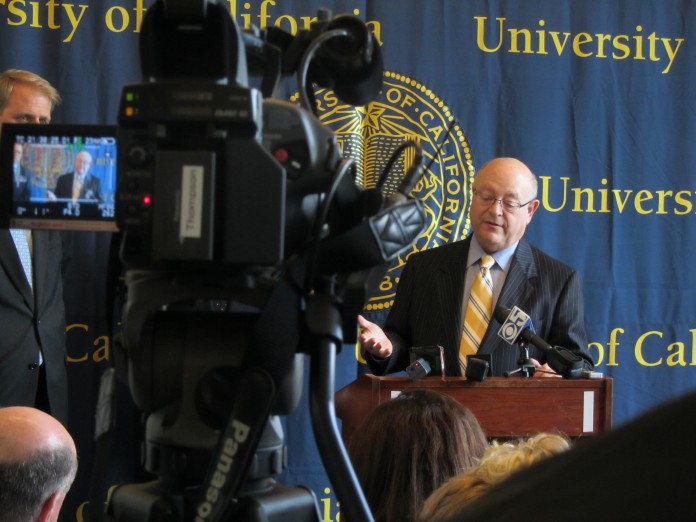 University of California Officials announced Monday the postponement of the Nov. 16-17 UC Regents meeting in San Francisco amid fears of potential violent protests and demonstrations.

Immediately following this announcement, UC Student Regents Alfredo Mireles Jr. and Jonathan Stein released two statements in disagreement with the postponement of the Regent’s meeting and expressed solidarity with student protesters trying to bring to light continued state divestment from, and privatization of, the UC system.

In a two-page combined statement Mireles Jr. and Stein addressed the decision to cancel the Regent’s meeting as well recent protests on UC campuses over budget cuts and incidences of police brutality at University of California Berkeley.

“…Students have a right to protest peacefully and make their voices head forcefully; this action eliminates their opportunity to do that,” said the student regents. “We hope that the University of California and its leadership can join students in the fight to preserve truly public higher education for all our citizens.”

In a press release by Sherry Lansing, chair of the University of California Board of Regents, Vice Chair Bruce Varner and President Mark G. Yudof, it was revealed that multiple sources received information indicating prospective rogues planned to situate themselves on the campus as peaceful demonstrators, but really harboring the intentions of causing violence and confrontation outside the Regent’s meeting

After further consultation with authorities, officials with Board of Regents and UC Office of the President agreed to postpone the meeting citing that failure to do so might amount to “reckless disregard of credible law enforcement intelligence.”

UC Officials would not provide further details on what intelligence was brought forth by law enforcement prompting the postponement.

Mireles Jr. and Stein adamantly disagreed with UC administration’s decision to cancel the Regent’s meeting because of possible protests.

“Free speech and providing equitable access to education have been hallmarks of the UC and particularly UC Berkeley — by suppressing speech that advocates for education access, we do violence to two of our most cherished principles,” they said.

The student regents cited the police violence that occurred against students at the UC Berkeley campus Nov. 9, calling it reprehensible and criticizing administration for defending the police’s actions.

Mireles Jr. and Stein said they would support finding ways for student’s to exercise their right to protest while eliminating elements that cause violence and vandalism at the Regent’s meeting or in Sacramento, where they urged students to lobby.

UC Officials plan to reschedule the meeting, though have not yet indicated a specific date. Officials are also looking into changing the venue of the meeting.

“I am really disappointed because the way it’s interpreted is another way to silence student voices,” said Associated Students Vice President of Statewide Affairs Ahmed Mostafa. “But I do understand the meeting would probably not be safe for students.”

Mostafa said the cancellation of the Regent’s meeting will be included in the dialogue for a protest held Wednesday, Nov. 16 at noon in The Arbor in response to the Nov. 9 incidences at Berkeley.

The regents were to discuss and vote on a variety of business items in this week’ meeting. Included in the agenda was the 2011-2012 Consolidated Plan, which depends on a wide range of fund sources to support proposed projects, and a vote for the regents to take third-party oversight of the maintenance and welfare of the University of California Santa Barbara campus lagoon.

California’s New Budget Gives Back to the UC System