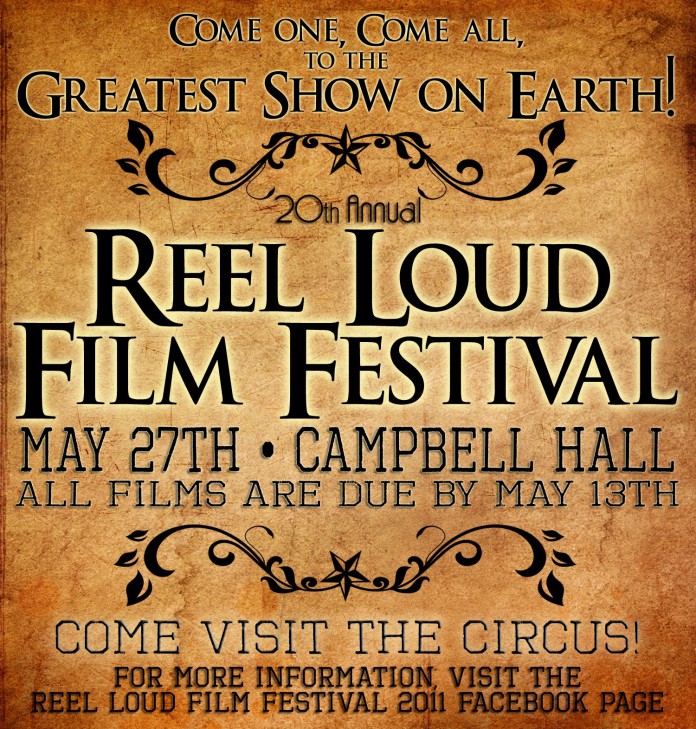 Before the films were shown, festival-goers were treated to a selection of artistic designs at the festival’s art show. The art ranged from abstract paintings to paper mache sculptures.

Lauren Matsumoto, a fourth- year Film and Media Studies major and one of two Art Coordinators for the festival, wanted to feature art from the surrounding Isla Vista and Santa Barbara communities.

“We went to different places in Goleta and Santa Barbara, mostly Isla Vista, because Caje had some great art,” she said.

Both Caje and Bagel Café contributed to the art in the festival.

“I was in Bagel Café, and saw these creatures made out of wire and newspaper and I felt that they would be perfect for the festival,” Matsumoto continued.

As well as pleasing aesthetics, festival goers were also treated to refreshments and entertaining juggling routines performed by the UCSB Juggle Club. But the party really got going once the doors of Campbell Hall opened and UCSB students, faculty and community members were invited to embark on an enriching exploration of student talent.

One of the factors that really make this film festival stand out above the rest is the nostalgic aspect of silent film coupled with brilliant live musical performances. The live musical acts really helped accentuate the films’ expressional elements. A good example of this was the upbeat sounds of Finger Folk, a local student folk band that performed the music to “Bicycle Day,” a film that follows a biker traveling through Isla Vista. Finger Folks’ riveting sound really embodied Isla Vista’s chill, laid-back vibe, winning them the much deserved award for Best Musical Accompaniment. L0
Another noteworthy performance was the music for “Pass the Parcel,” a film set in the Australian outback about a cat and mouse chase that ensues over a strange package. The utilization of a didgeridoo for this musical performance filled Campbell Hall with a thrilling and entrancing rhythm that really brought the spirit of the Australian outback to life. It’s no surprise that these musical accompaniments were a hit with the audience.
“I think it’s an awesome idea to have silent film and live music together,” said Nicole Abramson, a second-year UCSB student. Nicole was also in “Elixir,” a film about a scientist frantically working to meet an approaching deadline.
Entertaining performances took place periodically in-between films. Performances varied from singers to acrobats to a very entertaining hip-hop dance duo number. Each performance brought a fresh, unique element to the festival that really featured the various talents at UCSB.

Whether we were transported into a futuristic world of space ships and teleportation [“The Teleport System”] or laughing hysterically at the ironic miscalculations of a mad scientist [“Love Monster”] or even getting our heart strings pulled by a violinist finding his music in the movement of a deaf dancer [“Silent Heart”], each film stood out for its own individual aspect of cinematic genius.

The last film shown was a special presentation of a film featured at the First Annual Reel Loud Film Festival. “Oeddy Bear,” a dark-humored film about a jealous stuffed teddy bear, was the ideal film to close the night. Showing the film was a great way to pay homage to its leading lady Jackie Apodaca, a UCSB Film professor who will be leaving UCSB at the end of the year.

“I thought it [“Oeddy “Bear”] was brilliant,” said Johnlyn Colcol, a first-year Film and Media Studies major. “The pairing of dark comedy with a seemingly innocent stuffed bear was an ingenious combination.”

At the end of the festival, awards were given out to those films that really stood out in the minds of the judges as well as the audience. “Pass the Parcel” swept three of the five awards for Best Editing, Best Cinematography and the Audience Choice award. “The Legend of Lotus Castle,” a hilarious film reminiscent of old school Kung Fu cinema, was awarded the Golden Reel for best overall film and “Bicycle Day” won Best Musical Accompaniment.

The film festival was a tremendous success, to the great relief of event Producer Sahar Vahedi, a second-year Film and Media Studies major.

“My main objective is to bring the visions of the film makers to life”, said Vahedi. “This is their biggest venue every year and my job is to make sure they have an audience.”
Audience members were definitely not in short supply this year. The venue quickly became sold out, providing filmmakers with the opportunity to showcase their work to a full house as well as providing a great window of opportunity to celebrate classic cinema with the masses. Festival-goers lucky enough to take part in this extraordinary and inspiring event definitely left with a greater appreciation for silent film.

“Films like these take us back to our film roots” said Vahedi.