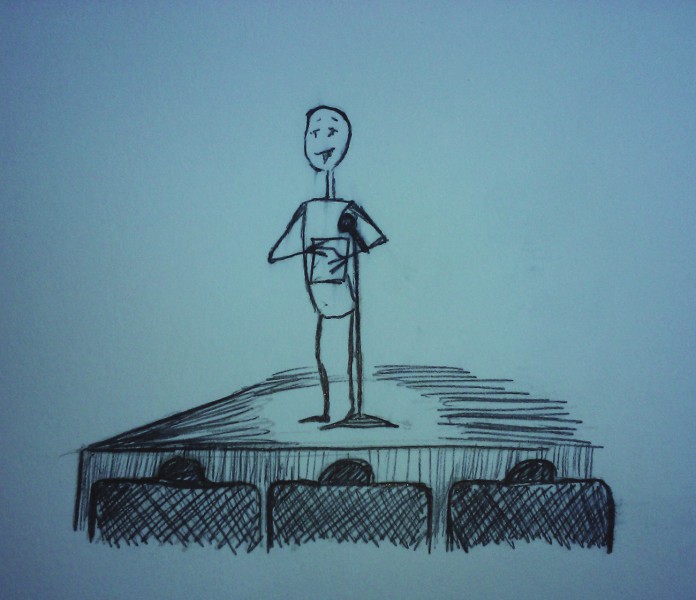 If all the lecture halls and theaters at the University of California, Santa Barbara formed a family, the Old Little Theater would be the annoying youngest sibling—not as big, not as fancy, and certainly not as mature. But the College of Creative Studies (CCS) students rally to make the homey theater their natural habitat as they lounge in the cushioned seats, feet propped up and arms loosely crossed.

Every Wednesday from 9:00 p.m. to 10:00 p.m., about 20 CCS Literature majors gather for Séance, an open forum reading where students read their favorite literature or writing that inspires them.

Yet the few and proud students show up relentlessly with tipsy smiles and poems or prose pieces in their back pockets. They plop down on the seats and chat with friends from classes until the reading begins. The atmosphere settles as students lean back in their chairs and listen appreciatively.

“I am super greedy and love hearing other people’s stuff,” said Armstrong. “It is so enriching. Literally, if I didn’t hear other people’s creative writing, I don’t think I would make it though the week the same way.”

Armstrong invites all students to come to Séance, regardless of their major, and to bring work they have written or writing that motivates them. Anything goes, whether it’s a Shakespeare monologue or bits from the website “Texts from Last Night.”

“Writing is like learning a language. You can’t do it in a vacuum,” said Armstrong.

Students presenting at Séance reiterated the importance of performing work to an audience in order to improve their writing.

“Reading a piece out loud really helps gauge reactions to your writing as well as help you, as the writer, hear what it actually sounds like,” said Paula Ersly, second-year Literature major. “Sometimes you’ll realize ‘oh, jeez, that sentence did not sound how I thought it did!’ and that helps you when you get back to editing.”

Sean Mabry, a first-year Literature major, added that Séance is unique because it specifically caters to writers, which creates a sense of community and a comfortable zone to present one’s work.
“I cannot even describe how important it is for good writers to also be good readers and presenters, and I think Séance does a lot to help us get back in touch with that,” said Mabry. “After all, literature was first born from the tongue, not the page.”

Armstrong finds that performing helps her write dialogue, which most writers find to be a daunting task. For Armstrong, dialogue is the easiest way to understand people in a literal and creative way. She hopes to share this philosophy with others and convince them that microphones aren’t scary.

Séance is not about preaching philosophies on writing, but relating to other people. Armstrong said that only by sharing can writers figure out if they want to pursue their talent as a career.

“Being brave enough to share your work is more real world practice than you get anywhere else,” she said. “Honestly, you could be the next Ernest Hemingway but if you don’t tell anyone, no one’s going to know, no one’s going to give a shit, and you’re not going to get any better.”