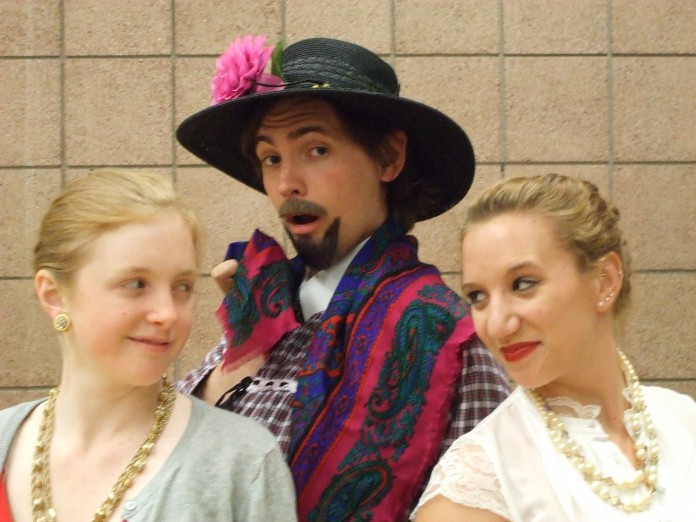 Some would call it irony, others would describe it as juxtaposition at its finest. Either way, the result of a combination of flourishing Elizabethan language, homeless spectators and Isla Vista’s raucous students is sure to raise a few eyebrows.??On Friday June 3 and Saturday June 4, Shakespeare in the Park will stage “The Merry Wives of Windsor” in Anisq’Oyo’ Park at 7 p.m. free of charge.

“The Merry Wives of Windsor” is a classic Shakespeare comedy full of hidden identities, roguish schemes and sexual innuendo. Sir John Falstaff (played by Ian Waston) plots to seduce two women in the town of Windsor by stealing their affections and their money. But when Mistress Page (Megan Caniglia) and Mistress Ford (Beverlee Weinsoff) discover his designs, they turn the tables on the shifty knight. Amusing plans for revenge, a jealous husband and vying suitors make “Merry Wives” a topsy-turvy play with clever wordplay and schemes gone awry.

The group Shakespeare in the Park, got its start with its first performance, “Julius Caesar,” in Winter 2008. After Director Gerry Hansen’s success in directing “McBeth!” in fall 2009, Shakespeare in the Park, overseen by IV Live, became a class open to all majors where students act in and produce the show. ??Hansen said that in addition to meeting in class twice a week for three hours, the students work outside of class to rehearse. Considering that many students are not theater majors and some have never even acted before, Hansen says that the greatest reward of the production is watching the students improve.??“I’ve had several students come up to me and say that they have never gotten so much out of an acting class before,” said Hansen. “They have worked more on a character and felt more in the moment on stage than ever before.”??Hansen chose to stage “The Merry Wives of Windsor” because it is one of Shakespeare’s lesser-known comedies. Additionally, the ensemble nature of the play allows both large and small roles, providing actors with the experience of varied acting roles.

Hansen lauds Shakespeare’s timeless nature that makes his plays enjoyable even for modern audiences.??“Shakespeare is unique in that it has classic story lines, but it has language that is so unique,” said Hansen. “This is a beautiful language that reminds us of what language can really be. And then it tells the story in an unusual, appealing way.”? Hansen describes Shakespeare’s comedic characters as “over-the-top” and “a little bit bawdy.” She modernized the costumes and relationships between the characters and reinterpreted the mythical nature of the play to something that she hopes will be “amusing to the audience, but also relatable.”??The actors identified the most difficult aspects of the production as finding more time to rehearse and projecting so that all performance attendees can hear their voices in the park.

Peter Dunn, a fourth-year cultural anthropology major, plays Franklin W. Ford, the “neurotic, jealous, but truly caring at heart” husband of Mistress Ford. He said that the outdoor atmosphere of the play presents interesting challenges for the actors.??“At the park you have the ‘locals’ in the area and sometimes they will participate as you perform and be loud,” said Dunn. “Or if there’s a helicopter that goes over, you would have to pause and take notice of it. You can’t ignore things that are going on [around you].”

Second-year theater major Beverlee Weinsoff plays the mischievous Mistress Ford. In a way Weinsoff described her character and Mistress Page as “kind of like the Weasley twins”, with them “in cahoots” with each other, insanely plotting together. ??Weinsoff agreed that it has been interesting rehearsing in the park with the homeless people of Isla Vista.

“A lot of the time they just watch us and clap,” said Weinsoff. “They’re very nice about it. They say, ‘Oh, it’s nice to see you using my home!’”??However, both actors agreed that the best part of their experience with Shakespeare in the Park has been meeting and befriending new people.??“What’s so great about this is that we didn’t know each other before and the fact that we have come together in a park in Isla Vista to perform Shakespeare with homeless people cheering us on—that image is so Shakespearean in itself,” says Weinsoff. “I love things that bring people together to enjoy the same thing.”

For more information go to www.islavista-arts.org/specialprojects/shakespeareinthepark.html