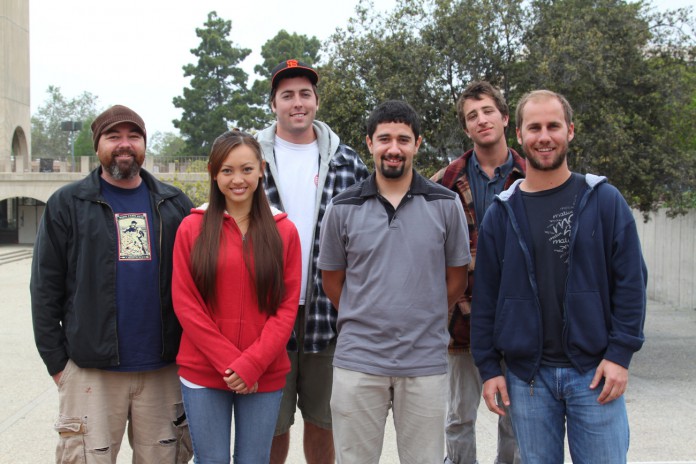 Those who are already frustrated with the stresses of spring quarter can alleviate their tensions at the premiere of Aggravated, a comedy about an insomniac and an abnormally large cricket that makes its debut at UCSB this May. The film, which was directed by UCSB Film and Media Studies and Art Studio fourth-year graduate student Fred Buckley and produced by UCSB Film and Media Studies fourth-year Alex McQuiston, takes audiences on a journey into the realm of the unconscious and the entomologic and blurs the line between dreamscape and reality.

The story centers around Reginald Dunlap, a young man whose lack of sleep causes him to envision that a giant cricket is invading his home. But this cricket is no Jiminy Cricket clad in a top hat and a black jacket; rather, it is an oppressive force that threatens the safety of Reginald’s home and pushes him to the brink of sanity.

“I find psychological films to be captivating and fun, and after reading the script I thought there was some good material to work with and a lot of humor to explore,” Wray said.

The supernatural concept was developed by Buckley, who wrote the screenplay as an adaptation of a book of the same name by Robert Judge Woerheide. The process of writing the screenplay and filming the movie took about a year, from spring of 2010 to its current post-production state.

“This story, aside from being funny, really struck a note with me.  As a student with two kids, I find myself suffering from a lack of sleep – often,” Buckley said.

“I started thinking about my own experience, and that of the short story’s protagonist, and I adapted it for the screen. It really gave me an opportunity to explore the idea of what happens if you are not allowed to sleep, and how it might trickle down to all the other things in your life like your spouse, job, etc,” he said.

Considering how many students at UCSB sacrifice sleep at one point or another during their collegiate career, the movie is an exaggerated reflection of the average college student experience. In a simultaneously hyperbolic and humorous manner, it emphasizes how sleep deprivation can cause more than baggy eyes and an inability to stay awake during class—it can legitimately mess with a person’s psychological health.

As Carriger said about the relationship dynamics that play out in the film between Marcy and Reginald, “She [Marcy] is in a marriage with a man that she loves, [but] she is slowly but surely losing faith in this marriage because her husband is sort of going crazy.”

There is also humor that stems from the story’s irony of using a cricket, which is a universally accepted symbol of nighttime and sleep, as the impeding force that prevents Reginald’s peaceful slumber. Despite the seemingly analytical and ulterior meaning of the film, however, Buckley asserts that there is no underlying message.

“I’ve been asked this a couple of times, and there is no theme or message,” he said. “It’s really just a character story that takes a romp through Reggie’s psyche as his life crumbles.”

He added, “The intention of the project was to show the “aggravation” that Reggie was feeling toward his helplessness.

His life is on a slippery slope, and he isn’t able to do anything about it.”

“Reggie represents a lot of guys out there who are struggling to find their male identity and niche in society,” Wray said. “He’s well-intentioned but is so afraid of failure that he lets it control his life and we see the deterioration of a man. Over the course of the film we see him turn into a social zombie.”

Buckley and his crew experienced some aggravation of their own during the production of the film, due to a shortage of funding and difficulties finding shooting locations.

“Although we were successful in raising funds, it goes fast. So the bulk of our budget went to equipment that translated explicitly to increased production value,” he said. “Another challenge was locations.  This film called for specific locations, and this took us a while to nail down.  But through the generosity of some local business owners, and with one campus location, we ended up with exactly what we needed.”

Despite the setbacks, the film was produced successfully and the cast and crew have high hopes for its premiere.

“The most rewarding experience was just working with Brian and Fred and the rest of the crew,” Carriger said. “I love film, so getting to do it at all is a reward within itself.”

For more information on Aggravated, visit the official website at www.aggravatedthemovie.com/crew.php.

How They Ruined A Good TV Show: Bays and Thomas Slap...

Jordan Peele Goes Deep in “Get Out” at the Pollock Theater