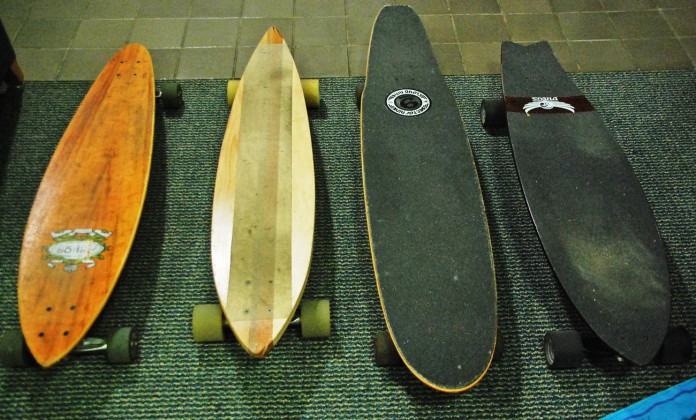 After seeing over a hundred skaters hurl themselves down mountains last month, I assumed that downhill skateboarding was a sport that required classes and training. After all, downhill skateboarders often reach speeds of 60-70 mph, and “throw slides” to stop themselves, because they’re going too fast to brake otherwise.

But taking lessons isn’t included in the spirit of the sport. Marcus Bandey, founder of Wheelbasemag.com and longtime downhiller, put that statement into context.

“The only way to skate is go skate”, says Bandey with a cheerful disregard for normal speeds.

That’s exactly what the skateboarders at the Santa Barbara slide jam did last month.

As an outlawed slide jam competition coordinated by UCSB fouth-year Max Myers, the SB slide jam was host to some of the best skateboarders in the world, including James Kelly, the second best downhill skateboarder in the world.

Several UCSB students were among the competition, including Louis Pilloni and Kyle Martin, who won first and second place, respectively.
At the foot of Los Padres National Forest, UCSB boasts some of the best roads in the world for downhill skateboarding. The sport got its roots in Glendora and Malibu during the 1970s, and has been growing ever since. Skateboards and parkboards, capable of only 25 mph, limited the sport because of “speed wobbles”.

Skateboards needed major modifications before they were ready for the extreme downhill speeds.

“Once they created the reverse kingpin truck, then it was on,” says Marcus Bandey. “Honing in the urethane, so you can slide without locking up [was also a breakthrough]. That’s all happened within recent years and it allows this whole booming thing to happen.”

“With an outlaw event like this, there’s no permits,” said Myers. This meant that the event couldn’t be widely advertised. It proved to be much easier to hold a secret event, instead.

In spite of the lack of advertisement, the slide jam had a huge turnout and as skaters headed up the hill before the race, they commented on the turn-out and how the sport has grown from last year’s competition.

“There was so much skill,” said UCSB second-yearand downhill skater Chris Cawdrey. “So many great skateboarders. Everyone was so stoked. It was definitely one of the best events I’ve been to.”

Though there are many residents along these mountain roads who feel inconvenienced by the skaters and the sport faces many legal obstacles, downhillers agree that the sport is growing.

Cawdrey encourages up and coming skaters: “You’ve got to skate all the time, and you can’t be afraid to fall. If you ain’t fallin’, you ain’t learnin’.”