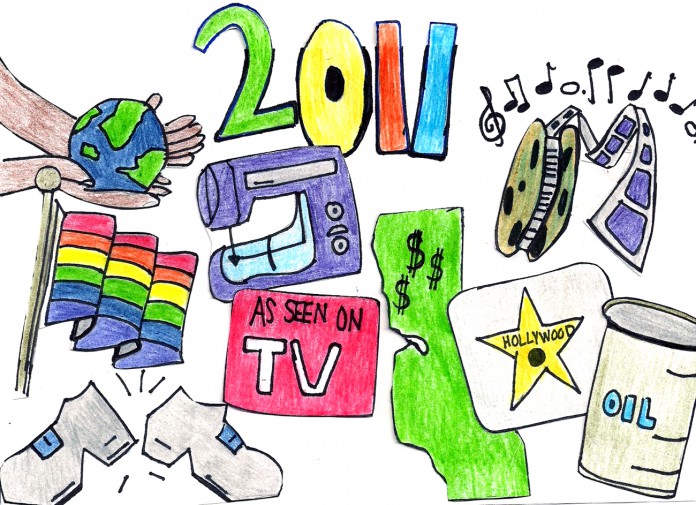 1. A Cure to Bieber Fever. I think the screaming preteen girls pushed me over the edge. Or maybe it’s that The Bieb is nominated for a Grammy? How come this music is what’s appealing to the masses? Might I suggest real music featuring men who have already gone through puberty? That’s what should be playing on the radio.

2. A new consumer product that’s even more ridiculous than a Snuggie. I admit that a blanket with sleeves is pretty hard to top, but I’d love to see 2011 try. Tune in to late night infomercials to see if this wish becomes reality.

3. California [hopefully] getting its act together. Anyone else see something wrong in paying $10,000+ for tuition? How about cuts to public education and mental health, to name a few? I keep thinking we’ve reached rock bottom, but the end seems farther and farther away. Hopefully we can solve this budget crisis as soon as possible. Two years without a budget should be a crime.

4. The next absurd fashion Lady Gaga will rock, and the symbolism behind each outfit. The Kermit dress was fashioned to protest using animal fur and hide for clothes, while Gaga used a meat dress to combat the “Don’t Ask, Don’t Tell” policy. Designers, start your sewing machines!

5. To see if The Hangover 2 will truly be as good as the first. I’m scared the producers will over do it and that it will be a large-scale disappointment. The original was such a classic; maybe it should just be left to stand on its own.

6. Giving gays and lesbians the same status as straight people, though our society will only allow us to inch ever so slowly toward that goal (sigh). I look forward to the day where we can just accept people because they’re human beings.

7. The next Hollywood starlet to make a comeback. In 2010, Sandra Bullock divorced cheating husband Jesse James and won five awards for her role in The Blind Side, solidifying her presence in Hollywood and becoming one of the most recognizable actresses to date. Twenty dollars says Lindsay Lohan is 2011’s success story. With her arrest and rehab stints in 2010, I hope she’ll be ready to return to the entertainment world stronger than ever.

8. Not having a boatload of oil spill into the Gulf of Mexico. I was disappointed not only by the fact that the closure of the Gulf cut merchants off from their means of income, but also by the pictures of marine mammals covered in oil. Maybe we can discover and implement an alternative fuel in 2011.

9. The newest dance craze that I can know how to do and not look idiotic doing. I couldn’t jerk or dougie, and the thought of me fist pumping is ridiculous. I hope I can master whatever 2011 has to offer.

10. More moments that reaffirm my faith in humanity, like the aid efforts aimed at helping Haiti after its earthquake. Things like that show me that human nature is still very kind and that we have it in us to pull together and push through strife. It’s nice to know that people are there for you and care about you.