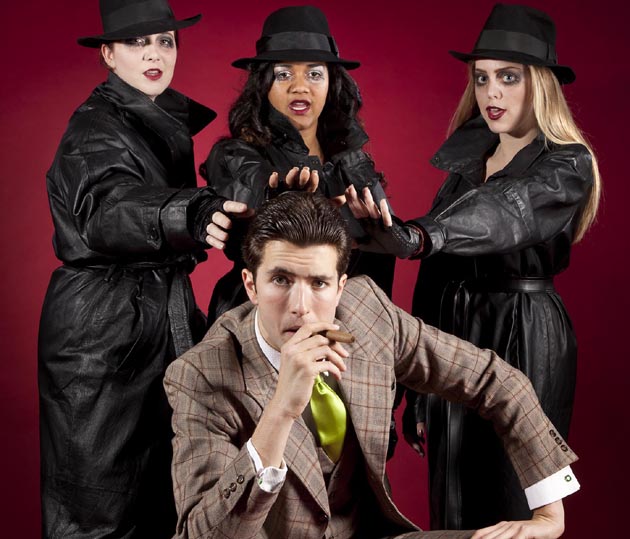 Biederman’s Match is the story of Jack Biederman (Julian Rubel), a businessman who wants to end terrorism in his community but ironically invites terrorists to live in his own house. The crazy plot merged with all of its theatrical elements makes this show spectacular and satisfying.

“I liked how the show was in a small theater because it felt more intimate, especially when the actors were talking directly to the audience,” said Castro.

The small theater also had the benefit of creating impressive special effects. The intensity created by the strobe lights, fog, flames and explosions seemed to be multiplied within the walls of the theater. These effects created realistic elements that made the scenes more believable and captivating to watch.

The characters in the play were just as intriguing as the special effects. Julian Rubel, fourth-year Global Studies major in the BFA Acting Program, had a unique way of getting into character for his performance.

“I wanted to base Biederman on someone opinionated who sees things as either black or white,” said Rubel. “So I watched a lot of Glenn Beck.”

Rubel’s choice seemed to be effective as presented Biederman as a complex businessman who was interesting to watch. Rubel and the other performers made it so that the audience could not help but feel captivated by the dynamic characters.

Biederman’s maid, Anita (Hasmik Saakian), provided the play with much of the comic relief with her sarcastic tone and ridiculous reactions to Biederman’s commands. UCSB student Jordan Holmes played the part of the terrorist Said very well, portraying him as a childish yet conniving and sneaky person. He especially entertained the audience in one of the dinner scenes in which he begins singing about turkeys and covering himself in a tablecloth to look like a ghost.

The costumes reflected characters’ personalities and occupations. For example, Biederman seemed very professional when dressed in a suit. His wife Babs (Courtney Salvage), wearing a bright dressed and her hair nicely done, was portrayed as a preppy, fashionable woman. Anita’s maid outfit made her stand out and remind the audience of her job and purpose. In addition, the accents of Willy (Andrew Fromer) and Anita complemented their costumes even further by adding even more individuality and uniqueness to their characters.

Just when I thought the performances couldn’t get any more exciting, the five band members filled the theater with lively music. The band was joined by three voices of the chorus, a group of “guardians” who reveal bits of the plot and its themes to the audience while trying to prevent acts of terrorism from occurring in Biederman’s home. Their musical performances, which occurred between scenes, engaged the audience with catchy tunes.

Another thing that made Biederman’s Match such a pleasure to watch was its ambiguous ending. The play ended with the chorus singing a song claiming that the play was “useless,” leaving the audience confused and interested about what the moral of the plot really was.

Risa Brainin, freelance director and Professor of Performance at UCSB, thought that a couple motifs stood out in the play.

“This play is about how we don’t see what is in front of us and how we don’t admit what is going on. It brings about the idea that if you sit by and watch a problem occur without doing anything to stop it, you are just as guilty as the person performing the action,” said Branin. “It also speaks to us about how people are politically correct and don’t step in instead of stepping in and helping create a solution”.