Focus the Nation, a week-long event, culminating on Thursday, January 31 at the Corwin Pavilion, will raise awareness and promote realistic “green” solutions in politics.

“It’s an opportune [chance] for people to hear about global issues and how they translate to local issues,” says Juliette Wigley, an intern for the Department of Geography at UCSB.

The day kicks off with free registration at 8 a.m., followed with a presentation by Ernest von Weizsker, Dean of the Bren School of Environmental Policy and Management; his speech will look at solutions to climate change, including the Bali Mandate. At 11 a.m., the Director of Corporate Strategy/Sustainability for Wal-Mart, Janelle Kearsley, will talk about big business’s option to remain big ‘stepping it up with green action’ or to revolutionize as localized small community economics.

In the afternoon, political leaders and other influential people in the Santa Barbara community will host workshops on how to improve the environment. The workshops will give the opportunity for a large dialog between the community, students, and faculty according to Wigley.

Even simple solutions can make a big difference in the environment. The key is to “think globally and act locally,” reiterates Professor Keller of the Environmental Studies and Earth Sciences department. He mentions small things that people can do on an every day basis like recycling, using public transportation, taking reusable bags to the grocery stores, and switching to compact fluorescent light bulbs.

The biggest step toward a better environment is education. Focus the Nation offers the perfect atmosphere for any one who would like to learn more about global warming. “Education is the key to understanding problems,” Professor Keller said.

The easiest way to make a difference, however, is by voting. At Focus the Nation, local politicians will attend and answer questions from students, faculty, and the community. “Students need to be aware of their consumer choices and [that] their votes impact our chance of real action on this critical issue. Such awareness is even more important during an election year, especially given that current economic disruptions and worries threaten to distract us from longer term threats like global warming,” states Professor Lea of the Paleoclimatology, Paleoceanography, and Geochemistry department.

The day continues, after speeches from politicians at 3:30, at the Multicultural Center with “The Shape of Water,” an influential documentary by Kum-Kum Bhavani. The movie will center around issues like rainforest preservation, ending female genital cutting, and sustaining a co-operative of rural women in places like India.

In the evening, the events will move to the Goleta Valley Community Center for a Q&A with Marty Blum, Mayor of Santa Barbara. There, the community can speak their mind to local influential people about growing environmental issues. Wigley states, “Even if someone knows the science of global warming, there [are] a lot of new issues coming up opportunities to ask questions. Speakers are the ones making [political] changes. Learn and ask questions with extremely knowledgeable people.”

Organizers for Focus the Nation made student interests paramount. “We used input from other people to see what they wanted. It isn’t about [the] straight facts of global warming. It’s about big issues that didn’t come up in Gore’s movie,” says Wigley. Perks include: free attendance, the option to come and go, and the fact that scheduled sessions start and end at times between the ten-minute rush on the bike paths of every hour. Students can attend any session in between their classes with ease.

“Global warming is…one of the most urgent issues of our time,” says Professor Kennett. Global climate change will affect people economically, raise sea levels, and have an influence on many species. When asked what Professor Keller would say to someone who does not believe global warming has anything to do with humans, he responded, “They’re ignoring the evidence.” He later went on to say, “Climate change is an issue that is really important to this generation as well as [to] their children…It’s going to affect everyone.”

Check out Santa Barbara’s chapter of Focus the Nation on Facebook, or read more about the event on a national level at
http://focusthenation.org. 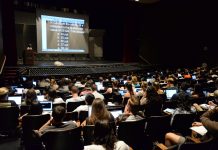